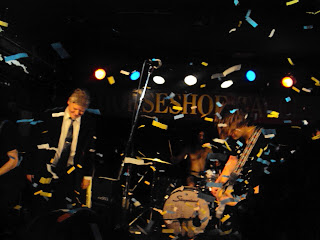 It was back in the NXNE in June when I came to know about the Manotick born indie rock band, Hollerado when they opened for Hot Hot Heat. (Click here to read this post.) Right after the show, I got their first album, "Record In A Bag" As I have fell in love with their enthusiasm and insanity, they recently have gained a number of interest from the Media, including the featured artist on Edge 102 (for those who aren’t local, that is Toronto’s première alternative rock radio station)and the most recent YouTube video of "Americanarama" - which made them be called as the second OK GO. 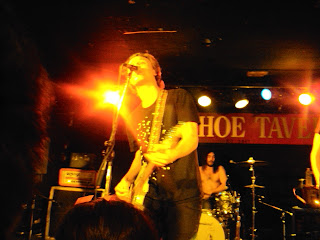 I was able to set myself right in front for the show at the Horseshoe Tavern, just like when I saw them at Mods club. Fulfilled with excitement, I stood there with my friends waiting for the band members to show up on the stage. They started the gig with a song “Hollerado land"- a recorded song playing while the members were getting ready to rock the stage. My excitement has reached the peak, as I was screaming loud with friends. They easily fired up the stage with their well-known songs; Juliette and Americanaramana- which made me wonder which song they would use to close the show. It is because usually a lot of bands saves these "hit songs" to the end, including them in their encore. 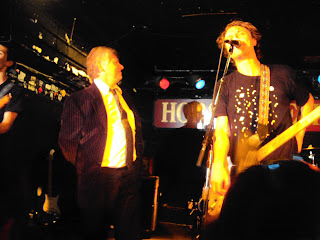 Likewise the last show and Ok Go, the confetti paper colored the stage like a rainbow while the members were performing on the stage.  But did Hollerado actually need it in order to entertain the audience? -probably not, as their energy and catchy dance tunes brought to the stage; it was nothing but extraordinary.
Not only did the Hollerado performance make the night, but also the special guest from the audience added a spice to the show. The guitarist and singer of the band suddenly pull a person from the audience - it was David Foley, from “Kids in the hall."  The audience was wowed by the appearance of the Canadian comic actor. (Unfortunately, growing up in  for 20 years, I was not sure who he was, but I sensed his popularity. He looked famous, too. Hahaha, well my friend told me that he was super famous...) this sudden appearance also surprised the band members too! 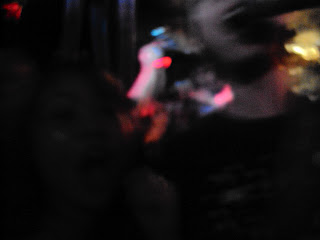 Continued the gig with more minor songs, and they were rather more mellow and slow-tempo songs, I was paying extra attention to the stage to truly enjoy the sounds generated from the stage. To my surprise, I realized that the drummer was only wearing his underwear.. “Hold on,,, wasn't he wearing a T-shirt and jeans when he showed up on the stage??" - this was due to his tweeted message He stated in Twitter that he would play naked if a hundred of people retweet the message he posted. So I guess he got 100 people retweeted it! At the end of the show, he was almost naked. Well you know, he can't really be naked, and I did not wanna see his junk... but I guess it entertained lots of people by the fact that he was put duck tapes and paper around it and hid it somehow. 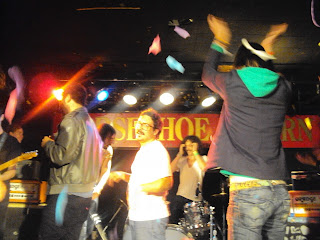 Anyhow, they closed the main part of the show with a song, “do the doot da doot doo" (Love the title), which includes a crazy jamming at the end of the song. During the song, Menno, the singer, who happened to be right in front of me, pointed his microphone to the audience and then came down from the stage. I got to sing along and jump around with him too, which was pretty epic! It reminded of me that when I first saw Butch Walker- who did the exact same and I happened to be right in front (yes, “happened to be") I screamed like a baby! My friends, Boris and Martin even said that my facial expression when Jake came down from the stage was priceless. Damn it, I only have burly picture that I can share with you all.
As I was extremely content to be the part of the gig, David Foley came back on the stage by himself and engaged the audience to be ready for the encore!!! Once the audience screamed like crazy, asking Hollerado to be back on the stage, they of course same back with a BIG smile. I was wondering again, which song they were going to play as they played all songs from the album. Then this song hit the stage- "Rocking in the free world", a song of Neil Young. A couple of people from the opening band, Free Energy, David Foley,  two back singers, and even a guy who was in charge of firing up all the confetti paper were on the stage with the band, dancing around singing along. It was just insane! The song echoed aloud in the entire venue-everyone was just signing and jumping around. Well you will see what I mean if you watch the video below.

The show was insanely good. I can't recall when was the last time that I sang and jumped around so much during the show. Some people might criticize them being immature (a good example is the drummer being in naked in the venue) But so what!? They can bring it onto the stage. They have lots of fun during the show ( they may be the one who is having a fun the most) They just proved with this show that no matter how old you are, you get to loose up with great tune sometimes and just have fun. Nothing is wrong with that at all. I was just so impressed with the band's ability to make me feel the way. It was indeed a magic that they put on everyone.
To close this post, I would like to quote a message from my friend, Martin, who was at the same.
"Record in a paper bag is much better live then recorded :)"
Hollerado! Good luck on the very first U.S tour! I am 150% sure that you guys would rock the hell out from them! Cheers!!!