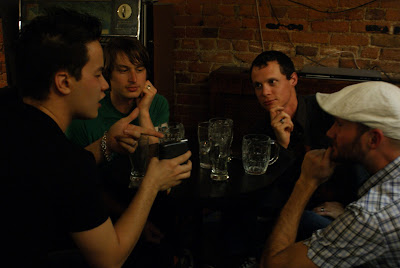 It was back in August when me and my ET fell in love… with the Toronto based instrumental band; Escalate! at their Pedestrian Sunday performance in Kensington Market. (Click here to read the post!) Grant (bass), Jordan (Guitar), and Tyler (Drums) joined us for our very first interview at the cozy Imperial Pub. We loved interviewing Escalate so much that we have decided there would be three parts of this interview released “bi-daily” (Oct 25th, 27th and 29th...)  Here is the "Toasty warm" interview with  Escalate! That you can't miss!