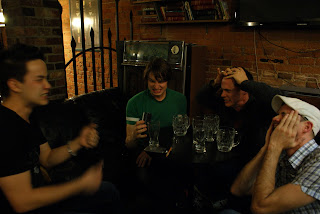 Let's continue with the awesome interview with Escalate!


B: With song writing, you've mentioned that one of the tracks that you guys jammed on became a song on the first record. With the other songs, was it that easy again or was the process a bit more drawn out? How did you guys go about it?

T: It's weird - it's very hit and miss. It's been different every time.
G: Sometimes its a bit more methodical, like "Let's try and work on some stuff." And other times, it's just been very sudden; out of nowhere. Three or four songs might just came out from on or two practices. And then that might be it for 6 months, until all of a sudden it happens again. You get worried sometimes. Sometimes we wonder, "Have we ran out of ideas?" and then a couple weeks later an album worth of material just appears!

J: Yeah, its pretty crazy. It is interesting that it does vary in terms of writing process. Some songs happen quickly, and as Grant was saying it comes out so naturally and so easy. Sometimes we develop songs part by part by part. And sometimes nothing comes at all.

G: But I found the best ones are the ones that just kinda happened. It just usually comes out while working on something else and other people just really catch on in a collaborative way - a great way. Remember when we landed on?

J: What is it called again?

B: Speaking of funny song titles; some song titles are weird for you guys. With "the Beep" the reason for its title is obvious. hahaha

G: It's just a matter of hanging out and all our stupid humour. And someone says some really silly jokes and but some of the one-lines come out and stick though. I guess all friends do it - have that one joke that just lasts. And that's how some titles are developed. A one liner might last for a while and then something about it reminds us about what the specific song sounds like. Yeah what is the song,,, ah "Blood, Sweet and Tom Jones"

G: We used to have a riff that was way too close to what Sigur Ros sounded like; and we called it "A Little Sugar Rose"

B: I like it! Let's talk about influences. You listed them on My Space. But what about your individual influences? I'm sure everyone is a little different, right?

B: Do you have any that would surprise people?

G: Compared to our sound, people might find it weird that we like hard core gangsta rap?

B: I definitely got that with Alpha Beta Kappa Donna (EDITORS NOTE: for the less Gangsta Savvy that is a reference to Cappadonna, a Wu Tang Clan Affiliate)

B: Yeah, I was listening along and I was just like ",,,yeah" hahahaha

G: It's all over the place. We all like crazy different stuff.

B: In terms of a instrumental band, is there anybody particularly that you find yourself often compared to?

T: Yeah, there are different ones. When we first started what we thought was that we may be similar to the Meters.

J: and when it comes to an instrumental band, it may be Tortoise?

G: yeah, Tortoise is definitely another one! Yeah, but you may have a song and it could be any genre, and you know one part where you might say, "Let's try to make it totally like this band" or something. Or we might write a song like a band that we all like.

B: Almost everyone does that anyway. Everything is derivative now of what you'd like anyways.

G: Homage! It's not stealing!

B: According to Led Zeppelin, you're right! But according to lawyers and agents, its a totally different story. Is this something that you guys are looking to pursue at a professional level?

G: Well, we are all getting up there and we might have when we were really young. But obviously priorities have changed.

B: Yeah, as a father I imagine they would.

G: Well any of us and all of us, really. Every decade that goes by you have a new set of priorities.

B: It could be every few months

G: And you know, a year long or six months long world tour if we ever achieve the level is not really what any of us want to do anyways, right? I mean, sure I would love to go play in Japan or play here or there or wherever, but it's down that road and we'll come to it if we get there.

B: A lot of people find themselves disconnected from reality when they do that.

G: For sure. I think when being grounded is what keeps us grounded and keeps as us musicians. But a film and TV and releasing records, and doing shows are kinds of our home base. And that's what we are doing right now and we are really enjoying. A film is definitely another thing though altogether.

B Would you like to do a whole soundtrack?

J: Yeah, that would be cool

T: I would actually love do track it live while the show or movie is playing on a big screen in the middle of a recording studio. I'd love to just kinda play tunes over the course of practising, and actually write a full score. I would love to do stuff like that. But even just to have your song in a movie is pretty cool!

G: Yeah we had a couple of minor successes in a past couple of years. We have a song coming out in a movie due in this year, but I haven't heard or seen the actual take yet.

B:Can you say what it is?

B: That's pretty awesome! What kind of movie is this?

G: It did well in the festivals apparently, but its due out here this year. It supposes to be like an action-comedy. It got interesting reviews. Who knows, hopefully it does well and they will give us a song for the credit that's great success for us. Cuz it was what we wanted to do.

J: that ones actually off the last record.

G: We did some systematic things like the green peace thing; we did as small online film, we gave some music for that and a couple of blogs. Stuff like that. That's the avenue that we are working and like we said, we're just enjoying playing and releasing music. As long as the band keeps supporting itself. That makes it easy to keeps us doing it.
Posted by Unknown