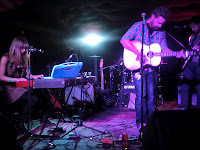 I jumped on a streetcar and headed to Rancho Relaxo to witness Winnipeg folk rock quartet, Federal Lights after the Archives' performance.

Starting off the set with a fun alter country tune, I Woke Up, Jean-Guy Roy was the centre of the attention from the very beginning as he showcased his substantial skill as a vocalist. Their song range varied from folk to heavier tunes, as they performed most of the songs from the latest album, Carbon primary. Their variety of sounds was like a cookie jar- No matter which piece I grabbed, it emitted a difference taste of the band, while I enjoyed each one of them. Maybe I am a little greedy bastard, aren't I?

What I enjoyed the most was Roy's hauling voice, which was best fit for songs like the title song, Carbon as he enabled to express emotions more as a song got escalated, which attracted more attentions from the audience. Sometimes it feels so good to be reminded that music is also a mean to express themselves, rather than having infectious tunes to dance.