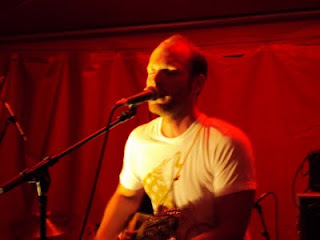 My labour day's weekend is over, which means that I'm back in school from tomorrow. I'm sort of excited. It would be great to have a time off during the weekdays. but no so much excited for the fact that I gotta study and work at the same time, it's gonna be interesting.. umm, wish me luck... Anyhow, before time passes by soo quickly, I would like to still talk about the v-fest that I went last weekend especially about The Rural Alverta Advantage.

I found this band a couple month ago. I was listening their debut album over the Internet, and with the very catchy and folky sound, I was in love with this band in a second. the drummer is very skillful. then, I had a chance to see them back in July when they played @ the Horse Shoe Tavern. It was packed by the crowd. I thought they are getting more popular and popular, which is totally understandable because of their music. This 3 piece band was playing @ the V-fest. there were 3 stages @ the set, however, the 3rd stage was the smallest one, which was set up in a tent. I had a hard time finding the tent and I and my friend had to ask around.

Finally when we got there, there was nobody because we apparently got there very early ( we expected it to be packed since we saw the packed Venue a month ago) anyhow, so we decide to go front and wait for the band to get started the show. Gradually when people started gathering around the tend after the Pixies, the band started rocking the place 10 mins earlier than the scheduled time. It was soo close. I mean, I was in front of the band and yeah it felt as if it was a private show or something. that's how close we were. I think we were very lucky to be there early. well, before we knew it, there were so many people around the tent and we couldn't believe that how many people were actually there.

Despite some technical difficulties with the keyboard and the fact that they band had to play in the tent, where there were so many bugs around the light. at one point the singer swalon the bug right before he had to sing. but he somehow manage to start singing. Other than that, it was very good show. their songs are very high beat and catchy. very energetic! I was so glad to see them that close and had a chance to see them again. I hope they will be back in Toronto pretty soon. well they are from Toronto so they should be back soon. I have posted some pics and video that I took. so Enjoy!


Last weekend was amazing. It was certainly the best weekend to end my summer break for sure. From Thursday-Sunday, it was all about friends and music. I had a chance to see Blue Rodeo. They are a Canadian band and well-known throughout any generations. My friends told me that they have grown up with the music. Without saying it, as I've grown up in Japan, I had no idea who they are, but guessing it would probably like "Kaien tai" (A Japanese band that everybody in japan know) I loved the show and the fact that there were so many families, dad, mom, sons and daughters are all happily together and singing their songs. it was such a pleasant moment.

on Friday, I went to this event called, " Fake Prom" I got invited from my friends and yeah, it was so much fan. Again, I've never been to Prom. I don't say I missed mine, coz we don't have "prom" In japan. but yeah, it was awesome. I ended up being wasted and when I woke up, all I remembered was 1. I had such a good time, 2. somehow I got back to my friends place ( Thank you so much for taking care of me !love ya!) 3. I fell down somewhere (don't even remember) and hit my butt LoL it hurt so much and yeah till a few days ago, I was suffering from the pain. But it was such a good night.

so on the weekend, I went to V-fest, one of the biggest outside shows in Toronto. This year, they happened to change the location in the last mins. It supposed to be at a park in Barrie, however, they moved it to the Molson Amphitheatre. i wasn't sure how it would work, but it was actually better than being in a park for a whole day, standing and waiting for bands to play.

So I decided to write about it of course. yet, I wanna make several postings in order to talk more about the festival. I will be writing 3-4 postings in a couple of days and I'll be talking and introducing the band. Cool?

so I gotta say that the best performance throughout 2 days was, MUTEMATH. It is not only because I like their songs so much, but their live performance is one of the best and craziest ones that I've ever seen. Although I didn't get a chance to check out a lot of shows in the last few years, I do go to see different bands. Yet, I have to say Mutemath ROCKS.

Especially the drummer, Darren, he is totally gifted. The way he drums is crazy. he doesn't need to play a drum, if he has a drum stick, anything can be a drum. I guess you just have to experience how it's like @ the show. so I have posted a very good video.

Their songs are, needless to say, very catchy and good, even when the song is instrumental. before seeing their show, my expectation toward the band was as like watching the Killer when they first came out and became famous. But it is nothing like the Killer. honestly, Mutemath is million times better. I don't mind flying to somewhere to see mutemath. that's how awesome they are! it was like a masic!!!

so here is the video. Enjoy! I'll be talking about the Rural Alberta Advantage in the next posting since I got to see them very very Close, so with the video that I took and of course pictures, there have to be a posting about them.