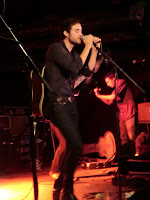 It was love at the first 'listen'- After endlessly listening to the latest album, The Other Side, of PEI singer songwriter, Tim Chaisson, (click here for my album review,) I had a chance to chat with him and also witness his show at Horseshoe Tavern on November 17th during his Canadian across the nation tour.

Brightly greeted with a big charming smile on his face, Tim sat down on the patio with us at Horseshoe Tavern prior to his set. Before we started, a couple of friends spotted him at the patio. Without any hesitation or disregard, he shared his smile with every one of them. His approachable and honest personality mirrors in his music. In this new album, The Other Side, each of the 11 tracks closely opens up the door to the hidden memories and it flips through the listeners' own slide show of their memoirs.

Tim has worked with Juno Award winning singer, Serena Ryder on the first single off the record, Beat This Heart, in the track and music video. "One of my favorite ones off the record is, Beat This Heart. The reason is that one of my favorite singers sang on it. She's got such an awesome voice and it brought the song to life. The producer that I worked with on the record, Colin Linden had worked with her many times and I was always a big fan of her although I'd never met her before. I mentioned about having a female singer on the record and I asked if Serena would ever join. I didn't think that would have happened but she was around and she came in to record her part and she was just so awesome."

One of the reasons that I love this album is the authenticity of the album, just like Tim himself. While listening to the album, I could easily picture him playing each song in a live setting and the raw feeling translated very well from the album. This is due to their recording process of the album.-The whole album is a reflection of the real life setting. The recording was done in 7 days at woodshed studio with the producer Colin Linden. “Since I tour lots with my band or by myself, I wanted to make an album that I can play by myself or with the band, then when people buy the record they wouldn't be disappointed with the entire fancy instrument (that weren't at the live show.) We recorded in a very raw and organic way. We all played in the same room together. I want it to feel like real people playing it. Colin was awesome. He was one of the best guitar players and great person to work with. I've learned lots from him. Having him playing the guitar in my album was such a treat." 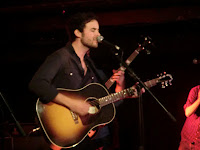 His show after the interview was definitely one to remember for me in 2012. The set list concentrated heavily on the new record, The Other Side, while I was so withdrawn to the stage. I didn't notice until the show that Tim was such an awesome fiddle player and very natural on the stage. His kindness appeared on the stage as well as he asked the audience to give applause to the sound guy, one that rarely works the hardest, yet, not recognized often. He closed his set with instrumental Celtic tune and showcased his superb fiddle skill, which triggered multiple dances on the floor.

Currently Tim Chaisson is on the road with Poor Young Things to support his record and then off to Australia. He returns to Toronto on December 7th to open for The Trews at Enwave Theatre.  A hectic schedule is still ahead of him.
Posted by Unknown No comments: 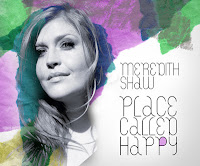 Toronto pop singer songwriter, Meredith Shaw released her new video, Girls Who Believe a few weeks ago. This song is a single off her debut album, Place Called Happy. Filmed at Toronto Island with the director Ryan Nolan with girls who were cast through her YouTube contest. Her girls-next-door persona and generosity reflect in her flawless soft voice. In fact, she has partnered with Girls inc, a charitable organization that supports girls between the ages of 6-18. Her work is very inspirational. Check it out!

Invasions Cult of the Half Moon 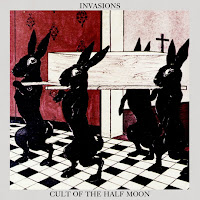 Toronto garage rock band, Invasions have at last unearthed their debut album, Cult of the Half Moon, early this week after waiting for almost a year to release their debut album. They've come a long way to unleash it after some member changes and delay from the label.

The kick-off tune of the album is their first single, 666, which is a hyperactive smash-and-dash punk rock tune. You may be surprised with the rest of the album if you carry on with a thought that this tune would set the tone of the record. The rest of the album, including Confrontation and Covered in Blood, denote a slight change in their sound, which is more toward a mellow tune infused with spaghetti western and 60's surf rock. It was obvious that they were heading in this direction when I saw their live performance two months ago at Sliver Dollar. I personally think this change set them apart from other garage rock bands with their unique and dovetailed alluring verses.  I cannot be more excited to hear any new materials from them at this point.

You can give a listen via  Exclaim! Magazine for free or they are playing this Friday at Sneaky Dee with Lost Babies and Loose Pistons. Click here for more details.
Posted by Unknown No comments:

It was around this time of the year last year that I've discovered Toronto pop rockers, the Elwins by their humorous Momember video. Then 2012 seemed a much busier year for them with their first album release, And I thank you, which received a praise from the media including Exclaim! Magazine. On the top of the release, they've toured continuously throughout the year to support the CD release.

Just in time for the holiday season, the Elwins unveiled their new music video, Forgetful Assistance, off the album. It features choreographed iPhone dances and the band members real hands with their signature fetching melody. It's very creative and makes you tap your toes. Give it a watch!