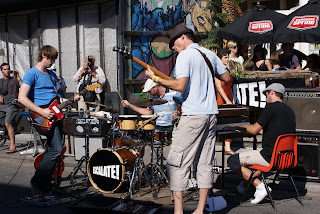 It was an unusually hot and humid Sunday afternoon during the last week of August. Nonetheless I figured I would brave the heat and explore the city with new SLR (Thank you Bryen!) 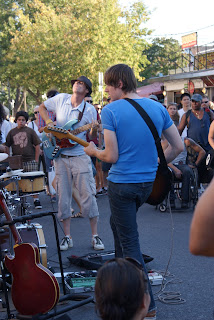 While hunting for food with my friend Eric, we suddenly stopped right in front of a band performing in Kensington Market. It was pedestrian day in the market, which happens every last Sunday of the month in the summertime. I could not help but stop to watch the band play- it was a Toronto Jazz-groove band called “Escalate!” performing on the street with a growing audience around them.
The very catchy organ sound from their song, "Aquatic" was bouncing back and force in my ears as though I already had known the tune before. The songs that they played were all instrumental-which is not normally my cup of tea. However; the moment I heard the tune I was lost in the groove and couldn't resist listening to them. When I first passed by their performance, I was only able to listen to two songs (one song was definitely Aquatic; I’m not sure what the other song was) After finishing the set, I and Eric went to grab their CD and I got the second album released in 2009, "Other brothers" and he got a wrist band -which reminded us of the movie, "Scott Pilgrim vs. the World!” 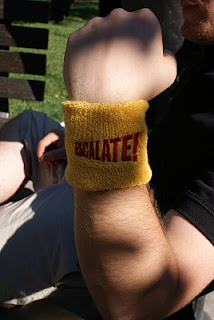 We passed by the band second time when we decided to head to a different part of the city- though, it was very hard to get through it not only because it was jam-packed, but also the tunes from the band was just so hard to miss. When I spoke with the bassist, he has mentioned that they play on the Pedestrian days at the Kensington every month and has a couple of shows at different venues around the city, which you can check out from their face book page (Click here to go to their face book page)
After listening to the CD repeatedly, I am now a big fan of the band! I love the song  "Sup, Sun" and "Aquatic" so much that I have been listening to the songs on endless repeat (“Aquatic” is now my ring tone - no longer is my theme song, "Drunk Girl” by LSD sound system !!) I would love to check out the first album pretty soon for myself :) It is seriously worthwhile to check out this band!! Don't miss out! – “Escalate!” is strongly recommended by Kanae :)