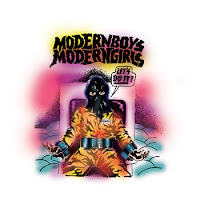 It seems like no one can stop the momentum of Toronto rock band, Modernboys Moderngirls. They have escalated to top speed with the recent release of their debut album, Let's Do It  after a number of appearances at music festivals, including CMW and NXNE in the recent months. The compilation of 10 garage rock tracks deploy their enthusiasm and their dynamic melodic hooks. This album has cultivated my curiosity over their sounds and I've enjoyed listening to the album from head to toe, while countless captivating verses remained in my head. No doubt that this album will pump up the adrenaline with their 70's reminiscent rock n roll tunes.


Starting off the album with their first single off the album, How Am I Gonna Get It?, which is a fist-pumping rock tune. Easily recognizing fierce guitar slap and impulsive harmonies during the chorus, it definitely triggers stuck tune syndrome from the very first listen. Their stellar music video was directed by Vulture Culture Films. Give it listen. You can also listen to their album via bandcamp site.

Modernboys Moderngirls will be performing at the Silver Dollar on Saturday July 28th.
Posted by Unknown