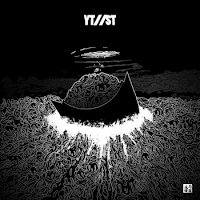 I've listened to a number of 'East meets West' music in the past, perhaps due to my background. Many artists and bands have strived to infuse different elements from two opposite worlds into one form of new sound, while leaving me unimpressed with the mix of two as most often they collide in the middle and I can't help but feeling a huge gap between.

I came to know about this Montreal based psychedelic/opera collective, Yamataka/ Sonic Titan. I was checking on Facebook as usual, and noticed that Lonely Vagabond 'liked' this Japanese named band on the site.  He is one of my inspirations, who is a Toronto Indie music guru. (Alan Cross talked about him on his blog a month ago. If you don't know him, then click here) And today, they just received a review of 8.2/10 from Pitchfolk. At this point, I could't help but checking out their new LP.


Thier new LP, 'YT//ST',  was released in September. As they describe their genre as 'Noh-Wave", which indicates the creative heights and satisfactions of genre fusion. It starts with this ritual howl in 'Raccoon Song', echoing through with thunders. It smoothly follows with the following song, 'Queens', with the high-pitched aethentic harmony. It builds up gradually with drums beats and grungy distorted guitar riffs. With the final tune, 'Crystal Fortress Over the sea of trees', the collective showcases the great mix of various genres from psychedelic to opera, including facets from the two ends of the world. This EP struck me like nothing that I've heard recently.

I also found this video, 'Counting Track', from their official website,  which made me eager to see them live. Kaboki-style white-painted faces (It's not like Kiss, more like Edmond Honda from the Street fighter...) is something peculiar yet, very alluring. It is so easy to be intoxicated in the atmosphere that they create. .