The Dudes: Barbers, Thieves and Bartenders 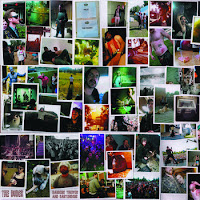 As the band name The Dudes indicates, Calgary based alt rock outfit are all about manly sweaty live shows and a passion for Rock 'n Roll. With their recent release of Barbers, Thieves and Bartenders, which is the initial effort of a trilogy of their albums to be released in 2012. Teamed up with Jeff Dawson at Mush Room Studios and The Den from Vancouver, the quartet deployed their 6 tracks of expansive musicianship: from onslaught of earsplitting scream in Tear it Up, groovy alt-country rock tunes, American Girl and Saturday Night to emotive ballads Good Times. Listening to this album excites me to know more about the 2 upcoming albums.

The Dudes are currently on a Canadian Tour and stopping by in Toronto Tomorrow, Saturday April 28th at Horseshoe Tavern. Who will be joining me?

You can listen to their first single off the album, American Girl here below.