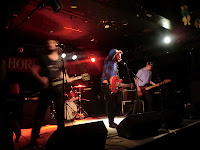 Drinking straight vodka from the glass and head banging their sweaty foreheads, Hallifax based rock band, Alert The Medic delivered an ardent performance at Horseshoe Tavern with The Dudes, Poor Young Things and Ascot Royals.

Despite the fact that they filled the opening spot of the night as Toronto rock outfit, the Archives were forced to give up on the spot due to an injury of a member, Alert the Medic didn't fall short of the privilege to play at the legendary venue on Saturday night. In fact, they seemed a better fit with the rest of the lineup in terms of the musical styles, which was a great introduction of the band to the city.(Don't get me wrong by saying this. I love the Archives and heart their music. I am just stating this in terms of their similarity in the music styles with the rest of the bands on the bill.)

Their performance was filled with energetic stage performance with grungy guitar riffs and hammering beats from their last efforts in 2009, We, the Weapons, I felt as if every time the front man screamed out his lungs, he was trying to burn the moment in the audience's memory, showcasing how Nova Scotians party. It is just a matter of time for them to conquer this province with their vigorous energetic Rock N Roll tunes.

They ended  their performance with a track off the album, Hey kids, To the Back of the Line. The repeating lyrics with alluring verse hooked my ears. I caught myself singing the bit out loud in the bathroom after the show.

If you missed this show, don't worry. Alert the Medic are fortunately spending some time in Toronto with their residency at Supermarket and also some other gigs in Ontario/GTA/Toronto. If you would like to experience stuck tune syndrome, you should check out one of their shows. Here is the rest of the tour dates.