Donlands +Mortimer, What You Offer 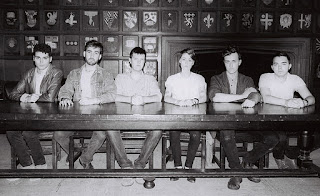 Timing is a very interesting component of our lives. Whether you call it coincidence or destiny, it sometimes defines the path that you are heading on next.

I came to know Toronto six-piece, Donlands + Mortimer, from Don't Touch That Dial, the recent Bowie tribute night at the Garrison via Now Magazine. Then, a few days later, I received an email regarding their first single release, What You Offer. Good timing, wasn't it?

Donlands + Mortimer have spent the last 3 years composing songs, which define themselves and their sounds. At last, they are ready to unleash a complilation of their efforts in the form of a new album, New Mythology in Spring 2012. Prior to the release, they've offered a nice sneak-peak piece off the album, What You Offer, Kicking off with a gentle angelic vocal of Carmen Elle, the song evolves its rhythmic velocities and vigour of the vocal. It is fun to listen to the capacity of her expression as it varies within the song.

Before the full album release, you can taste a bit of D+M and Music Psychos will be keep you posted on any news from them.
Posted by Unknown