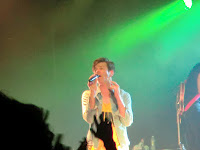 "The rule at fun.s shows is to sing along as loud as you can."- As stated by Nate Ruess, the front man of the New York orchestral pop trio, fun., they delivered a frenzied and 'fun'tastic performance, fully participated by the audience at Kool Haus on April 25th.

The opening act, Miniature Tigers shot the long-waiting audience with their infectious bazooka gun of 80s infused pop tunes. The crowd warmly welcomed the quintet on the return to Canuck soil since their last show in 3 years ago. Charlie Brand, the singer shared his excitement be backwith the crowd by making sweet comments between songs.

My eyes were attracted to Brandon Lee,  the bassist who was dancing his ass off from the beginning to the end with his rhythmical beats. When Algernon Quashie, key/vocal joined Lee and Brand, during one of their songs, Cannibal Queen, dancing back and forth on the stage, i felt as if I was at my friends karaoke party, when everyone shamelessly shows off their dance moves.

After been warmed up with Miniture Tigers' set, the stages heat cooled for a while as the 30 mins wait between the acts felt forever. Anxiety was what we all had in common. Then all of a sudden screams from the crowd blasted like a bomb when fun. at last stamped on the stage with a powerful opening tune, One Feet.Yes, we were just waiting for something to happen just as the song said. It was so easy to feel the escalation of the momentum from then on with their hit tunes, including Waking the Dog. Ruess was swinging from left to right, hop-step-jumping on the each corner of the stage between the members as to make sure to greet each one of us. His Broadway,(or I would even say, Glee- reminiscence vocal was something that people only at the show can appreciate, especially today, where it is hard to witness the true compelling vocal due to the advanced technologies such as Autotune. his lively voice echoed profoundly to the bottom of listener's hearts. He also showcased his sweet side as introducing All the Pretty Girls to celebrate one of the attendees' Stephanie's birthday.

Once the drum roll of the smash hit single with Janelle Monae,  We are Young, commenced, it was the climax of the night, while each one of the audience sang along so loud. Encouraged by Ruess 'Carry me home tonight'-the left side of the venue chanted, while the other half added a layer on the tune by humming  'nah nah nah nah na na.", I  pressed a shutter to capture the moment in my heart while nostalgically remembering their show back in March during SXSW. As it came closer to the end of the song, the venue was to explosive with the screams of excitement.