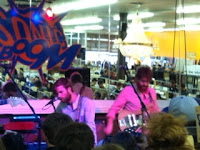 As part of International Record Store Day 2012, Sonic Boom invited a string of bands which comprised the best elements of the Toronto indie scene to date. The free show brought in large crowds and left me with an air of nostalgia - This is how record stores must have been in the heyday of vinyl records. Not to say that record stores are dying or that the colourful characters that like to peruse the thousands of obscure cd's and vinyls on offer are in vast decline but it's a digital age that we live in and independent record stores must have felt the pinch that is the intangible immediacy of online music stores coupled with music piracy.

From 1pm on this particular Saturday afternoon Sonic Boom was transformed into a busy hub of music fans both young and old, eager to get up close and personal with the impressive acts on offer. Sonic Boom did a great job of hosting the event, offering free pizza and good prize give aways. It was very all refreshingly welcoming. Something unique to Sonic Boom and Toronto in my opinion

It's not often that you get to be so intimate with the acts but it certainly felt different to be crammed into the isles between the record bins, leaning against The Very Best of Kenny Rogers vinyl while having The Darcys ferry their equipment to the stage. It's refreshing. It gives the man on the street and in fact the bands themselves an opportunity to interact in the perfect setting.

The Darcys shoehorned their gear onto the small stage backed by a surround of mirrors. It's a far cry from the setting of some of their recent shows but in that way it had its own charm. They played a short but impressive set of elctro-prog-art-rock. Mike le Riche put in a particularly impressive performance of musical multitasking partially hidden by the PA system. If you think that this sort of show wouldn't include as much vigor as another more high-profile show the sweat soaked shirt of  vocalist Jason Couse would carry a pretty strong argument.

Born Ruffians followed The Darcys after a short intermission. I must admit it was the fist time I'd ever seen this band, so I wasn't sure what to expect. Luke Lalonde got the set underway with a solo performance of a song which I do believe is part of his solo project (sorry I didn't catch the name of the song, shameful and unhelpful I know!). The rest of the band looked on patiently as he expressed his fine musicianship with narrative lyrics and a smooth familiar vocal performance. For me it was the highlight of the day. The rest of the band provided great support to Lalonde's talent in the songs that followed. I felt that the band really made an effort to engage with the few hundred people that had gathered by that time. Their cheerful relaxed style was easy on the ear and left the crowd content with this unique experience.

Written by Nicholas A Mitchell
Posted by Unknown