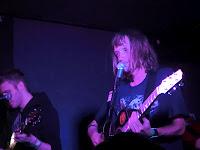 It is not so often to see a band that can pack the Garrison on Tuesdays. British folk rock outlet, Dry The River made it happen and conquered their first show in Toronto on March 27th, 2012.

The eyes of awaiting Toronto fans were glued on the stage. They remained as silent as the grave. I was even able to hear the noise of air conditioners between songs.

"That's what English people talk about, Weather" Witty jokes were exchanged among the band between songs, which crafted such a warm atmosphere, displaying their friendly personality. Once they commenced each song, everyone in the audience just leaned their ears over to capture every single seam of sound. The layers of stunning harmonies and graceful tunes from their strings led a path to a musical oasis. I was completely drawn to the world of music that they created during their performance.

Cheered and applauded by the crowds between songs, it was so pleasant to see how much attention that each one of us was giving to the stage. We would definitely love to have you back to Toronto.
Posted by Unknown