Bowerbirds at the Garrison on March 27th 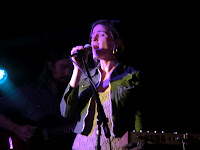 After the energetic performance by the opening band, Dry The River, North Carolina folk band, Bowerbirds delivered a beguiling set on March 27th, at the Garrison.

As they commenced their set. I couldn't help but feeling the disconnection in their sounds. Beth Tacular seemingly struggled with her microphone, while missing some of her keys when she sang the main vocal. However, it was just a matter of time. After performing a few songs, the uneasiness gradually ceased and their melodies synchronized into full bloom, while showcasing their parvasive harmonies.


The lead vocal and guitar, Philip Moore charmingly engaged with the audience between songs and he even shyly tried the Canadian 'EH?', which triggered laughter from the crowd. Pointing at Tacular, "I don't usually say this on the stage, but she is my girlfriend."- Moore introduced Tacular as his personal and musical partner, while making each other blush, but made the audience go " awwww". It was just really sweet.  The atmosphere became so relaxed that I felt as if I was at their lovable house party with simple, but real music.


During the set, each member switched their instruments for each song, which invigorated their perfomance. Tacular played keys and a accordion, Moore changed guitars to keys, Leah Gibson contrabass to keys and at last but not least, Mark Paulson showcased his musicianship and basically played everything from a triangle to a violin. Paulson's violin and Gibson's contrabass crafted a stunning verse and it drew intensive attention from the audience.

Most of the songs were from their latest release, The Clearing, which enabled the band to deliver their stories in the past few years, while sparkling harmonies echoed in the venue.

The band closed their performance with a song, 'Tuck the darkness in', which consisted an alluring tune with dark lyrics. I wouldn't have minded staying in the world of their story tale for a bit longer.
Posted by Unknown