The Rebel Spell to perform in T.O on Friday, April 13th 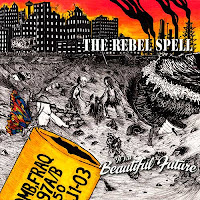 Do you guys remember B.C based noise pop band, SSRIs? The lead guitarist, Elliot has an on-going side project called, The Rebel Spell.

With the last year's release, It's A Beautiful Future, the hard rock/punk band is stretching their legs to the East Coast in this spring and they will stop by at the Hard Luck Bar on Friday, April 13th in Toronto. (Oh, by the way, it's Friday the 13th!!!) They can showcase Torontonians what they've gained in the last year's tour in Europe, including in Ireland, Germany, Frnce, the Netherlands and Belgium with UK Punk legends, The Restarts.

Check out their latest music video, It Can't Be Just Me.