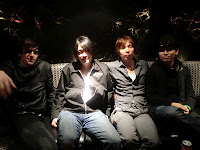 Making a meteoric rise from obscurity in the Japanese music industry in the past few years, Japanese hard rockers, Fade, are now ready to conquer their home territory with their sonic melodies. Fade formed in New York but have enjoyed most success in the land of the rising sun, especially with the latest release, 'Kings of Dawn.' Behind their glamorous success, the band have experienced the differences between the two continents, which leaves a distinctive edge on their tunes. Jon(Vocals), Rui (Drums), Kansei (Guiter) and Noriyuki (Bass) chatted with us prior to their Toronto show on March 23rd during Canada Music Week!

Kanae: Have you guys ever played in the North America or is this the first time?

Jon: It is the first time as Fade.

Kanae: You guys used to live in NYC?

Rui: Some of us were originally from New York, but we went back to Japan.

Jon: I am originally from Seattle, but I've been living in Tokyo for 12 years.

Kanae: How do you find the difference between Japanese and the North American music industry?

Rui: I think it's very different. The stuff that's popular here is not really popular in Japan. We actually had a lot of difficulties at the beginning. Jon sings in English first of all and lots of Japanese music industry people told us we had to sing in Japanese in order to get attention from the Japanese market. But none of us were able to write a song in Japanese, so we've been singing in English. The reason that we were able to do one song in Japanese on the last album was, we found a guy who can write lyrics in Japanese so we tried that. It was kinda interesting to see how Japanese audiences were able to sing the whole song along. We've found lots of new things.


Kanae: So for you (Jon) though, how do you find singing in Japanese?

Jon: Well it is totally different. There are lots of technical things that are different about it, but then at the same time, we've already tried it when we first started. We've been together for about 10 years now, but my Japanese was kinda shit at the time and things didn't work out. So we gave up and with what Rui was saying about lyrics and we decided that English was the way to go and to try Japanese again 7 or 8 years later. I think it actually helps me singing in English, too.

Kanae: In what way though?

Jon: The kinds things that you have to pay attention when singing in foreign languages, you have to go under the micro-scope a bit more than you would in your native language. You know when singing in the native tongue, you let it slide and it's your style, but it doesn't really fly in the foreign language. So I've taken the things that we learned form that especially when we were recording Japanese songs.

Kanae: Are you guys planning to come back to North America?

Rui : Definitely! This time, being able to go on a tour with RIZE in Canada, we've had a really good experience. The reason why that I went back to Japan in the first place was I am an Asian grew up in the States and I felt like I belonged in Japan. So I wanted to go back to Japan first and then come back here, so it's ideal for us. It's kinda interesting to see what kinds of reactions that we get.

Jon: So far the response has been good and we've been able to connect with lots of people. We'd love to come back to do a bit more of an extended tour in Cananda. We're heading to New York after this so we'd like to do this again as soon as possible.
Kanae: Going back to the fact that most of you guys come from North America and now live in Japan. What was the biggest culture shock that you had first in Japan?

Rui: All the venues in Japan have the full lights and PA systems. Everything is equipped. Where I came from in New York everyone had to bring their own gear to play sets. I thought it was amazing and thought "wow great artists are gonna be playing here." We are very fortunate to play in such an environment. But at the same time when you started relying on gear and set ups, we kinda forget some of the basics.

Jon: So for us to play a show at Tranzac the day before was really good. It was like going back to the basics.

Rui: We were talking about how we started playing in a band when we were in junior high or high school and played in churches and stuff.

Kanae: I call this 'reverse culture shock', when you go back home and being caught by a surprise by my own culture. Do you guys have any of that when you came to Toronto (North America)?

Jon: Canada has a bit of different vibe, but so far Toronto is very similar to New York City in some ways. People are much nicer. I actually feel more of home than being in Tokyo. I like how it is so much easier to relate to people right from the beginning. People are not too distant. If you hit it off right away, it's cool. I really like that.

Rui: The only thing is like the other day, we went to eat and I totally forgot about the size of food. We ordered so much and when all the food came out, we were like "HOLLY SHIT" It was like 20 people worth of food.

Kanae: The last album, Kings of Dawn. There are two cover songs that you've included. What motivated you guys to include these two songs?

Rui: We actually didn't have any purpose for the songs. It was like a management company's idea and they thought it would be a good idea to have cover songs especially overseas that everybody knows. It's our marketing tool. We didLivin' on a Prayer as we listen to Bon Jovi so we did that and we also did Relax (by Frankie Goes to Hollywood.)


Kanae: That (Relax) kinda threw me out.

Rui: The song was included because Japanese people don't really understand English so they don't know what the song is about.

Jon: But also there is one word in the song that's really easy to sing along too, even for Japanese people.

Kanae: I think it's very popular song in Japan

Nick: What do you kinda tell people when they ask what the song is about?

Rui: It is about 'relaxing.'

Kanae: You guys are releasing a new album in June?

Rui: Yes. Some of the songs are kinda similar in style from the last album (Kings of Dawn,) but others have much wider variety.

Jon: We definitely got the biggest spectrum of songs. Poppest to the pop and heaviest to heavy stuff.

Kanae: For the last album, you guys started using a producer. Will it be the same for this album as well? (Writers note: Kings of Dawn was produced by Hajime Okano, a famous producer in Japan, as well knows as a regular collaborator on L'arc~en~ciel's materials.)

Rui: We worked together with the same person for the last album.

Kanae: How has it been?

Rui: He is a great guy and I'd never met a producer that I liked, so I was always producing albums before that. But it was suggested by a management company to have a producer and he is a crazy good guy. He is like 60 years old and very funky. He'd done some work with L'arc ~en~ciel. The band is very visual and we are not that, so I was kinda worried about it first, but at the same time he knows what we wanted.

Jon: Actually we recorded these two cover songs first before Kings of Dawn and the vibe was really good so we decided to keep working with him.

Kanae: What's next for Fade after the album release?

Rui: We are going to tour in Japan and Europe in June. In Germany I think.

Kanae: At last, any words for Toronto Music fans?

Jon: Thanks a lot for the reception that we had so far and we're really excited that we got a chance to come here and play. Hope you like our music and we look forward to coming back to as soon as we can.