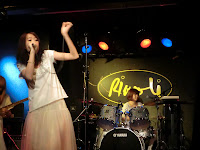 I've probably never seen so many people of my own kind in Toronto - Heard people talking in Japanese around me, I almost felt like I was back home. Being a part of Indie Week, Next Music From Tokyo Volume 3 brought a very interesting crowed, who were eager to witness what is hot in the exotic Asian  metropolitan, Tokyo. The organizer, Steven Tanaka (click here to read his story) successfully introduced Japanese bands to the sold-out Revoli on October 15th, 2011.

Four little girls, dressed all in white and standing with bear feet, Akai Ko-en, came on the stage as the initial performer of the night. Despite their innocent look, they bombed the venue drastically, with very peculiar, yet captivating rhythms and guitar riffs. On the top of that, what made their performance so hard to miss any moment of was their love toward music. You can just feel how much they love to play music, putting a big, (I mean, BIG) smile on their face. For the entire performance, I was so attracted to the unique and creative melodies that the petite girls can produce. It was even cuter when they tried to introduce each song that they were playing next. -" This is lonely song. I am lonely," as Chiaki, the lead singer somewhat managed to speak little English, which made the audience smile. 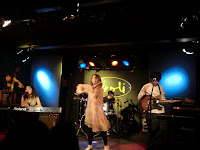 I was fully sartisfied with the first performance and I was excited to see what else Tanaka brought to Canada. Chiina, the second opener quickly jumped on the stage. Whereas Akai Ko-en entertained the audience with the element of surprise, Chiina brought me back to a place which comforts me with their orchestral harmonies, enhanced by airy verses generated by contrabass and violin.The jazz-pop quintet performed up-temped tunes, like "Ga to Cho to Takoyaki to Tako", while snapping fingers as well as a heartwarming ballad, "Blue", which made the audience silent.  The Violinist, Yukako was the attention grabber. It was very pleasant to watch her play the violin joyfully and divinely. 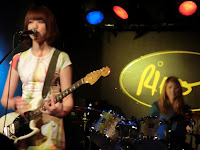 The moment the girls pop band, Merpeoples appeared on the stage, Toronto 'Gaijin Otaku' fans went nuts. " Kawaii!!!", "Daisuki~" shouted from the crowed, the four girls in colorfully dresses and ornaments beguiled them instantly with their bubble gum pop melodies which lingers in the ears for a while after the first listen. I was a bit overwhelmed by Toronto Otaku during the performance, yet, it was very entertaining to catch their high energetic performance. 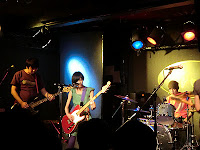 Last but not least, when Hyacca commenced setting up on the stage, I instantly sensed that it was going to be a hardcore. Thus, I evacuated myself to the side of the stage to avoid the moshpit and catch their performance and as I predicted it went insane.The thunderous noise and screaming that crafted from each member crushed in the middle and united as a constructed mess.  It easily  provoked a mosh pit and crowd-surfing as the band escalated and shifted into overdrive. As being the loudest of the night, the audience welcomed the ultimate climax with a song,"Hanazono," where the lead singer, Hiromi jumped into the crowed with her guitar, came back on the stage, shouting on the speakers, which was the wildest performance that I've seen lately.