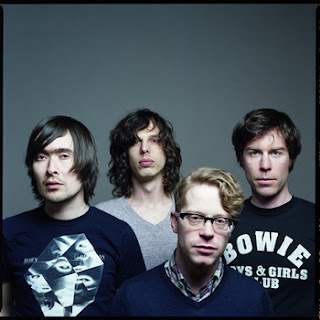 I've literally been playing "Sports" wherever I go, ever since I received an email notification about their free show on June 7th. Sports is actually a Toronto buzzband, who is set to release their debut album on the same day. Out of curiosity, I checked out their Bandcamp site and streamed every single song. The album itself consists of a great mix of poppy tunes and psychedelic tracks, deriving from each band member, who also belong to various Toronto beloved bands, including the Carnations, Meligrove Band, and the Michael Parks. Listening to this album is like going to a All-You-Can- Eat restaurant, in that it fulfills whatever you could possibly want; from harmonic vocal, to thunderous guitar riffs and everything else in between.
Their self-titled debut album, "Sports" is available for free streaming and download at a pay-what-you-want price. On their official release date of the album (June 7th), the band will be performing a free gig at the Horseshoe Tavern. You just can't miss this amazing opportunity!