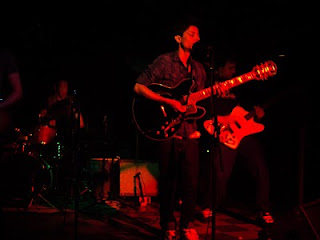 " Oh, Canada~..." Happy Belated Canada day! While people in red, (except these who were protesting for the public inquiry on the Bay St.  They happened not to wear red...), were celebrating the birthday, I decided to attend my friend, Anton's band's gig at Velvet underground.

The venue has very special atmosphere. It fits in so well in the Queen West " Hippie" neighborhood. It's very welcoming to the regulars, yet, a bit intimidating for the newbies. I love the venue though, it's very nostalgic. Anyhow, enough about the venue, so let's talk about the show. 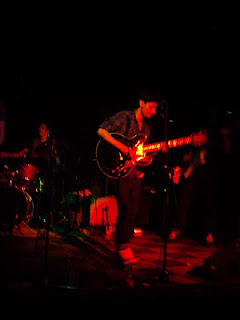 So after the opening bands, I really needed to heal my ears with some good tunes. My expectation for Artful Vandalys was pretty high as I mentioned in the previous post. Also it was because the performance posted on  YouTube were very consistent and fun.

The show started off with "Sign language". I love the song!! I have to say that the new drummer, Brendon, is amazing. He is fun to watch. I was really impressed with the technique! He is a great add to the band for sure :)
The show continued with my favorite song, "Dirty Blood", "Silent revolution". Very good show overall. I think if a band could make people dance, bang their heads, or even tap their top along with the song, the band is amazing. The only band who accomplished during the night was the Artful Vandelays. I hope to see them on lives again for sure or maybe new record release party in Toronto?? Will keep you guys posted for sure!!
Posted by Unknown