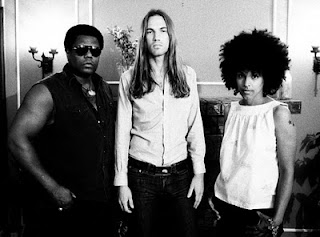 "A girl, who can rock a bass, is hot." I've learned it from Akko from GO!GO7188, the bassist of the band. She always says that when she plays the bass,  she plays as if she was a man. When I was in a band when I was younger, I choose to play the guitar, only because I am kind of a show-off. But my friend, Noriko, who had played the bass for 3 years with me, she always made sure to play like a guy. She was needless to say, hot..

The same thing can be said to Kamara Tomas, from Earl Greyhound. Her existence on the stage is tremendous.The Brooklyn-based three-piece band, Earl Greyhound is not just a "three-piece band". Their performance wows a number of the audience even before starting a show. The band setting is quite unique. A gigantic drum set in the middle of the stage, with very simple guitar and bass setting on the sides. The size of the drums is probably bigger than I am. well that is  for sure.. Like a size of a bear, that is hot!! lol 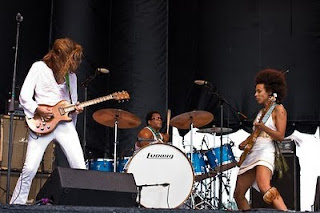 The drummer, Christopher Bear, rocks the drums, smashing every single drums! ( yes, his name is already awesome as his last name is "bear". He is massive, too!!) The scene can be very aggressive.

I saw their performance at the OK GO's gig at Mod club a few month ago. I was this close to buy the CD though. instead, I got the OK GO's T-shirt ( ok, I love the band men!!) Anyhow, the band totally scared me off as I was right in front at the show and there was a huge drum set in front of me. whenever he kicked the drum, the whole stage seemed to move a bit by bit toward me along with the music. An amazing gig for sure. Now I kinda regret that I didn't get their CD.

Their music is pretty influenced from the 70's or 90's heavy rock or blues. Very fun to watch their show. So on July 7th, they will be playing at Garrison. The tickets are available on Rotate This at only 9 bucks. If if you got a night off, it's worth going there.

Anyways, if I found someone to go with, you will see me there.

Here is the video and my space link. enjoy!


Check it out them on their My space site: