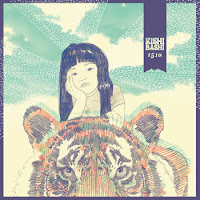 Since it is coming toward the end of the year, there are a number of Best of 2012 articles in the world of the Internet. I've landed on this amazing project, Kishi Bashi, after reading NPR's best of 012, where he scored 29th place on the favorite album of the year by the readers.

Kishi Bash is an orchestral pop project established by a multi-instrumentalist, K Ishibashi, aka Kishi Bashi. He's accomplished a number of projects with various talented artists in the past, such as Of Montreal (He is one of the current touring members), Regina Spektor, and Sondre Lerche, and now he is ready to be on the spotlight with his stellar violin/vocal.

Bright Whites, his new single off his debut album, 151a (it's pronounced as ichigo Ichie- 一期一会, which means 'one chance in a lifetime'.) has been on a heavy rotation since I discovered the song. It gave me an instant chill and joy at the moment that my ears were tickled by high pitched voice with a march of jubilant melodies. I haven't encountered any songs in the recent year which takes me to the effervescent paradise with a musical mingle in the air. He is definitely on my watch now!


Kishi Bashi is playing at The Great Hall on February 11th.