AroarA In the Pines 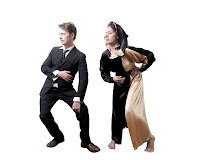 My favorite Broken Social Scene' member, Andrew Whiteman has teamed up with Arial Engel for a new project, AroarA since 2011. At last, the Montreal art duo has launched some new material on their newly established site this week.

They just unleashed three songs off the new album, In the Pines as a preview. (The release date is soon to be announced)  The initial song,  #4 reminds me of a tribal music enhanced with Engels distinctive husky voice. #5, on the other hand, is a peaceful tune, which cast a tide of melodic waves. #11 hits with electronic beats, still omitting the sense of tribal music. I am just so psyched to learn AroarA has finally moved forward with the upcoming release. These three songs excite me more and more about the upcoming release.

AroarA also announced that they would be opening for Dirty Three for Pop Montreal this year. I hope to hear about their Toronto show very soon!