Best day of my life! Meeting up with Butch Walker 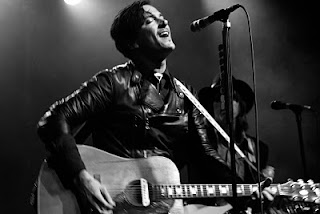 Happy weekend everyone! It is very chilly here in Toronto, yet, the weather is so beatiful and I feel like jogging today!

I am still very very excited and very happy about what happened on this Wednesday. As some of you guys may have known from the last blog, I went to see Butch Walker and the Black Widows' gig. They are unfortunately opening for the Train, so they had only 45 mins set. However, it was mind-blowing.

One of the reasons why I love Butch Walker so much is his energy during his shows. It is like Hiromi. ( I have a posting about her in the past ) He truely enjoy and enbrace to play music. Every single moment during the show, he does not give any impressions that he is playing as he is forced to. He is so into it.

I have two favourite songs from the show. The first one was " The 3 kinds in Brooklyn". This song is so much fun. Everybody from the band was hoping and jumping around. I had lots of fun. The second one, this is by far my favourite, but it is called ' the best thing that you never had'. My very first posting was about this song. This song just gets me everytime when I listen. The live version was so much better. Butch wasn't really singing during this song untill the end of the song, but other memebers were. I have to say that the members that he has right now, the black widows, is the bestest among all the band members that he had.

Well, this wasn't the end of the story for the night. I and my friend stayed in front to see the Train for a bit. We stayed there for like 5 songs. then,, I couldn't stand the fakeness of the show... sorry. No offense to the Train fans. but it was just a fake show.. a sort of like scripted, and they are there to play a show, but not really enjoying it. So we decided to join my other friends who decided to go to the back from the begining of the Train's show and stayed there till the end. Then I stayed very closer to the merchandise desk. and here you go.. There was Jake Sinclair, the bassest from the Black Widow. But not only that, I've known him from the band called The Films. I went up to talk to him, and I was so nervous and I couldn't even speak, but I told him that I am a big fan of you and the films and blah blah blah.. ( hope he understood what i was saying) and he was ok with taking a picture with me. yay, so there you go; 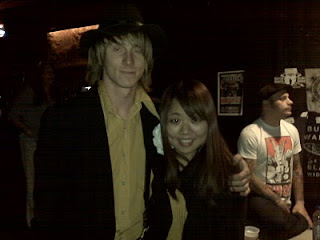 He also does lots of mixing and producing as well. I have a feeling that he would be sort of like Butch for the future. still playing own gigs, yet forcusing more on producing other musician.

Then we moved to closer to the exit because we just wanted to get out the venue once the show was over. It was such a good move that we made. because we also saw Fran Capitanelli, the guitarlist from the band. we talked with him and he told us that Butch will be on the stage about with the Train for their anchore. so we decided to stay for a bit more. 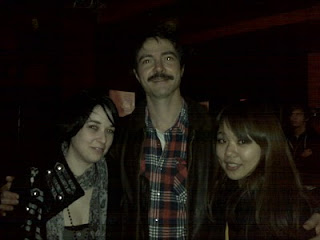 So we stayed and saw Butch outperforming the Train, hahaha. and when it was over, I looked the front and OMG, there was the BUTCH, tieing up his shoe. I was freaking out! Once he stood up, I went up to him and barely able to speak. I told him " it was amazing show!!............ (lost words) I LOVE YOU, BUTCH!!"
My friends were laughing and butch said it was sweet, blah blah. and we took a picture with him. it is blurry, but this picture will be for sure my treasure! He was such a nice guy and I just wish I could have told him how much his music means to me and you know, such and such. oh well, this would be my another mission of my life lol 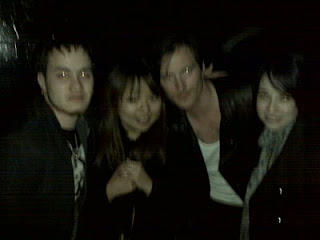