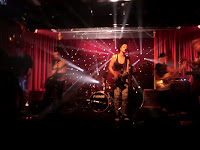 The frontwoman, Hill Kourkoutis's presence on the stage made her the centre of the attention; Being pleasant to both eyes and ears, while a number of shooting stars shed lights over on her, Kourkoutis showcased her majestic and hauling vocal along with the retro 60's surf rock tunes, such as A Bitch Like Me and Doctor, Doctor. Their sound was right up my alley as they are reminiscent of my favourite band of all time, Go!Go!7188.

Slow emotive ballad tune, Love isn't Safe, stole my attention. Kourkoutis poured her heart out. The plaintive feeling was contagious throughout the venue. I haven’t seen many singers who can transfer the emotion to the audience so well.

Hill & The Sky Heroes closed the show on a high note, The Better Way, brightened up the atmosphere with the gigantic sousaphone and 'kazoorachestra', a bunch of friends and audience jumped on the stage and joined the band with kazoos. It was the sexiest kazoo performance that I've seen in my life.

Their encore was accompanied by cheeky stories behind the songs, causing giggles from the audience. During the last two dark tunes, In Retrospect (You were the asshole) and There 's A Lie On Your Pillow, ( I think it was the last song, but I might be wrong) , Kourkoutis Bawled out from the bottom of her lungs.
If you missed out this show, don't worry. Hill & The Sky Heroes will be performing during NXNE on Wednesday, June 13th at El Mocambo (main floor) 8p.m.
Posted by Unknown