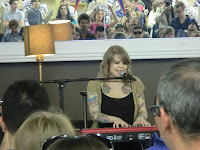 Quebecois singer songwriter, Beatrice Martin, the pioneer of the enchanting project, Coeur de Pirate, stopped by at Toronto's beloved music outlet, Sonic Boom on May 31st, 2012, prior to her live performance at Opera House on the next day.

Martin has established her solo project,  Coeur de Pirate, 'Pirate's Heart', in 2008. Since then she has been on the radar of countless indie music lovers, while nominated to Francophone category awards that you can think of, including Juno Awards,CBC Radio 3 Bucky Award and so forth. I've listened to her latest effort, Blonde, endlessly since I discovered her project on CBC Radio 3 last year, I had patiently waited until today to witness her performance in person.

Once Martin commenced her acoustic performance along with her keyboard with Adieu, the giant music store became pin-drop silent. Everyone was withdrawn to the stage and Beatrice's airy vocal like an angel. Or rather my ears decided to mute all other noises coming into and they were inclined to her presence on the stage.  The 60s infused pop floated in my ear with majestic words as she chanted. It was as if she was casting a spell on me while singing enticing melodies including Cap Diamant and Golden Baby.

While asking requests from the audience, Martin mentioned that some songs from Blonde are specifically written for a full band performance, while carefully choosing the next song she played, Ava.  The shy yet heartwarming little talk between songs deployed her personality.

Now Magazine has captured her performance of Cap Diamant. Click here to watch the  video.
Posted by Unknown