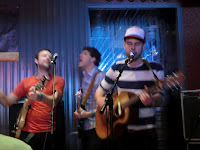 My very first time at SXSW was absolutely overwhelming, yet incredible. I witnessed a number of great bands and met some great new bands. I hope that around the same time next year, I will be hopping between venues for awesome music in Austin.

Here is the list of artists that I saw between Thursday, March 15th to Saturday march 17th with a short description of the show.
Thursday March 15th

The Elwins (Toronto, Canada)
Their acoustic set on the patio was like a little secret nest in the Canada!

Doldrums (Montreal, Canada)
Their drum beats electrified me to dance!

Trust (Toronto, Canada)
This project shouldn't be only recognized as a side project of Austra.

Gossip (Olympia, DC)
Nothing is better than free drinks on parking lots under the sun with groovy tunes.

Girls (San Francisco, CL)
Their brisk melodies smoothly took over the outside venue.

Kaiser Chiefs (Leeds, UK)
It was a hit parade of their masterpieces.

The Balconies (Toronto, Canada)
Their vigorous performance heated up the hot Austin more.

Of Monsters and Men (Reykjavík ,Iceland)
They showcased their ability to craft more authentic folk tunes rather than, the " Hey! song", Little Talks.

fun. (New York, NY)
Orchestraic pop rockers achieved the climax of the night without any technical difficulties this time.

Lovedrug (Canton, OH)
Isn't it disappointing when a band sounds way better in recording materials after waiting for 3 years to see?

Plants and Animals (Montreal, Canada)
They emitted such a positive chemistry among members. I could sense that they truly enjoyed playing music together.

Dragonnette (Toronto, Canada)
the Hello song was created by a Toronto band? I had no idea!

Timberland(Norfolk, VA)
The Amount of songs I actually knew took me by suprise.