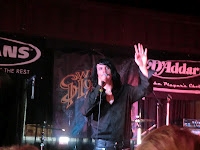 It's been such a pleasure to be a part of one of the biggest music festivals in the North America. After interactive people left the town for the festival, many more music fans have gathered from all over the world, changing the scene completely. I had a chance to catch up with some shows and here is how my day 5 went.

I jumped right into the Canadian Blast event at East side of Brush Square Park in front of Austin Convention Centre. It was surrounded by a number of Canadian symbols, gooses posters with the lists of artists performing during SXSW. While I was waiting for my coworkers, I sneaked into the tents and witnessed the very first act of the event, Library Voices. Their energy on the stage was so intense and it was as if it was going to blow out the tent. What a great way to start my day.

After tasting a bit of the homeland, we headed to Rusty's on 7th street to catch a party. As the event was free and all age, I couldn't help feeling quite old. But I am still young in my heart. Minneapolis rock band, Motion City Soundstracks managed to get through some technical difficulties with their gear prior to their set and blasted their melodic rock tunes. Their songs lured my ears throughout the set even though I hadn't heard any of their songs before.

I waited for this day to come so long: I witnessed the unique stage performance of Cincinnati rock band, Foy Shazam about 2 years ago and missed a number of opportunities in Toronto. After bumping into some members the day before at Nokia event, I swore that I would definitely check them out during SXSW and here I was standing right in front with two of my coworkers, who hadn't heard of any of their tunes. Once they rose on the stage, performing Welcome to Church of Rock and Roll, they monopolized the audience's eyes and ears and invited us into their spasmodic world.-Eric jumped on everything on the stage from the drum set to the shoulder of the members, smoking cigars on the stage, unveiling his microphone stand skills. I was mesmerized by their acrobatic stage performance. The set list consisted mostly from the previous album, which include a number of melodic beats. However, they showcased their hardcore Rock N' Roll soul with their songs off the new album, Church of Rock and Roll. Before dropping the microphone on the stage, Eric left with a word to the audience- You are all pregnant.

After experiencing something so outrageous and blowing my mind, I need sometime to recover to my normal state of mind. We went back to the Canadian Blast tent to feel something familiar and enjoy some classic rock verses. We got there just in time to catch Saskatoon rock quartet, The Sheep Dogs. Since they won the Rolling Stones Managines' cover contest, they have been one of the bands in Canada who are on the buzzed list by a number of major media. It was interesting to see how being popular in the Canuck Land is as different as night and day in the States. Yet it will be only a matter of time until more people recognize their flawless classic rock tunes.

After stuffing ourselves, we headed over to the Warehouse to check out some bands. We rested on hay between acts. Brit rock band, Tribes came on the stage and took over the venue with their dulcet verses, which was a reminiscent of The Libertines.

New York based pop rockers, fun. took forever to show up on the stage. It was one technical difficulty after one another. I have to say I was very disappointed that it became a 45 min delay. They couldn't set up their microphone first, and then there were some issues with keyboards. Due to my schedule for work, I had to leave the venue before they came back on the stage. Apparently they only performed a few songs acoustically. This incidence shows how important to keep their schedule on time.