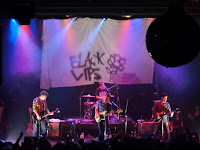 A night with the Atlanta garage rock band; the Black Lips, was wilder than any shows that I had witnessed in the past few years.
Our editor, E.T and I luckily found a spot upstairs with a nice wide view of the stage. I was little hesitant about our seating as I love going up front for any shows. Yet, it was a smart decision that was made after all. (Thank you E.T!) Opening acts by the White Wires and Vivian girls were mediocre at best. The White Wires opened for the night with a big smile on their face. They seemed joyful and excited on the stage, but the feeling just didn't transmit to the audience. It was predictable how the rest of their performance would proceed due to the lack of variety in their songs. Vivian girls, instead, had great hooks on each song they performed. I was especially fond of the drummer's powerful beats. However, I found the vocal was very hard to listen to ( It might be due to the sounds in the venue.) Blasting guitars and bass killed the weak vocals - it wasn't what I wanted to hear from what is supposed to be a good band. I'd drown myself in the sea of boredom after these two opening bands. 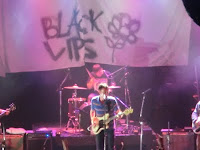 I thought sitting on the chair during the show was making the night so boring. I was regretting the choice that we made until this point. Everything turned epic once the Black Lips hit the stage. The band shared some of the new songs from their upcoming album, "Arabia Mountain". According to E.T, these songs were well-mixed and sounded less messy (thanks to to Mark Ronson's magic hands!) They also performed fan favourites including O' Katrina  (yay Scott Pilgrim!) and Bad kids, which escalated the madness in the room. 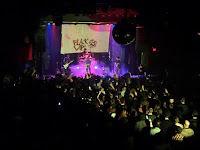 The Black lips certainly knows how to provoke their audience. The mosh pit was so crazy that I was so grateful not to be in the crowd downstairs. A  goof jumped on the stage, having escaped from the stage hand -but was easily kicked off the stage by the security guys. Another girl climbed up on the stage, kissing the guitarist and touching the balls of the bassist and went back into the crowd. The guitarist of the White Wires was one of the craziest among the mash pit, jumping off the stage several times.Then the front man, Cole Alexander, dived into the crowed, and came back without a shoe.
The chaotic night continued further when they came back on the stage with a couple more songs for the encore. The Black lips sure know how to party. I captured the amazing moment from the second floor for you. Enjoy!
Posted by Unknown