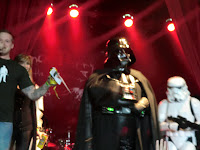 Nothing can be better than being welcomed by Imperial Storm Troopers at the door. 102.1 The Edge organized the crazy fun " Fearless Fred show" on February 25th, at the Sound Academy. The venue was arranged as a wonderland for adults: A bunch of pool and table tennis tables, gigantic video game screens, a stylish tattoo booth, and humerous t-shirt sales, while Darth Vader, and Storm Troopers were perambulating the venue. 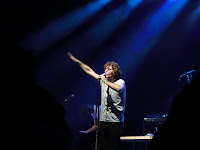 In between the free giveaways of numerous toys and gift certificates by the radio dj, Fearless Fred, there were four Toronto bands strutting their stuff as part of the night's line up. The winner of the Edge's Band of the Month, Automatic Toys, delivered decent electro pop beats to warm up the audience. The Ska rock band, Prince Perry and the Gladtones let loose some fun ska tunes. By the time the indie rock band, the Junctions hit the stage, the crowd had been built up perfectly. 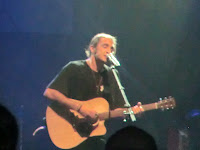 The last artist of the night, Toronto-born hip hop/fork artist, KO, wowed the crowd by appearing on the stage just like Darth Vader. (Click here to read my review of KO in 2010) He started in with a bluesy tune "Let's Blaze", showcasing  his charisma on stage: his compelling voice reached out to my heart so deeply that every lyric stung it. What sticks in my mind was the lead guitarist. His haunting guitar riffs wailed through the audience and whenever he performed his intricate guitar solos, he became the centre of the attention immediately. 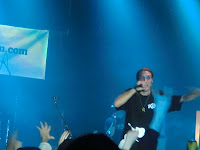 Continuing with up-tempo tunes, Kurt Kobain, Mountain Tops, and Represent, KO controlled the audience using "the force" and delivered a vivacious performance. My favorite song of the night was "Good Man, Bad Man" while his acoustic guitar echoed through the venue along with his voice. Closing with a his hit song, "Capable", the night reached its apex and everyone just sang along with KO, creating a memorable moment.

If you missed his show, there are more shows coming up. He is playing on March 12th at Horseshoe Tavern just for you that missed out.  KO also posted a Youtube video of the performance today. Check it out!!!


P.S Thank you so much KO for putting me on the guest list.