Hard Rock Cafe : Battle of the Band: A Primitive Evolution 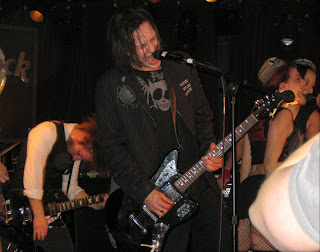 For Hard Rock's Battle of the Band 2011, only 4 gifted bands from all over the world will earn a spot to play at Hard Rock cafe Calling in London, England in June 2011. Toronto local bands have been competing for this opportunity since the beginning of February to decide who will represent Toronto's rock scene. 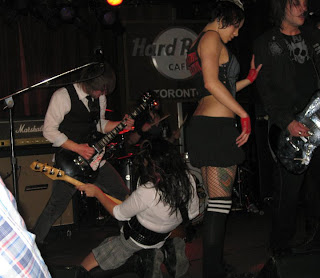 Invited by my best friend, Dani, I decided to check out the free semi-final at Club 279, located above the Hard Rock Cafe Toronto. There were 4 bands playing, including Left Turn City, Karma Kreeps, A Primitive Evolution, and Justus.
I was impressed with delicate guitar solo by Left Turn City and Justus, and charismatic vocalist from Karma Kreeps, I couldn't imagine how hard it would be for the judges to decide who will grab a ticket for the Toronto final, which is scheduled on February 23rd, Wednesday . However, when the third band, A Primitive Evolution, hit the stage, the answer became obvious. 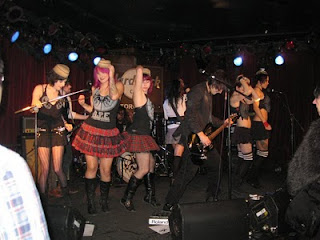 The gothic quartet's stage presence seperated them from the rest. Not only do they have the looks, but also the chemistry between the  band members was almost palpable. To learn that it was a very first show with their newly added, Scott Carruthers took me by surprise.
The show went into overdrive when girls in costumes and mascots jumped on the stage. Despite the crowded stage, the dynamic performance of the band was still the center of attention: the compelling vocals by Brett Carruthers, outrageous bass performance by Stephany Seki, supportive, yet, powerful rhythm by Stu Dead, and Scott Carruthers' expressive guitar howls. They picked up the momentum as their set progressed, and by the end of the show, they certainly have gained a number of new fans, including myself of course. They reminded me how much I love going to gigs  and made me realize that I have missed too many shows lately.

As predicted, A Primitive Evolution earned their spot in the free Toronto Final, which takes a place on Wednesday February 23rd, at Club 279. Make sure to show up next week to support this amazing Toronto Band.