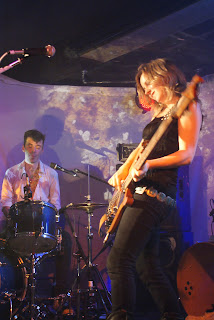 At least I think so. I could be wrong - heaven knows I've been wrong many a time before. Either way - that isn't what this blog is actually about. It's about one of my favourite bands, Lullabye Arkestra.

This was my second time seeing Lullabye Arkestra - I was pretty excited. Last time when I saw them, they had opened for the Dead Weather. While the band was great, most of the crowd had not heard of them; aside from myself - the crowd was less than responsive. So I was excited to see them on their home turf, playing to their own crowd. 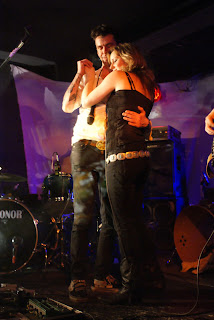 As soon as Justin Small and Kat Taylor-Small took the stage you could feel the crowd's energy change - it got heavier and hotter, really fast. They didn't waste their time getting right into their set. From those first pounding notes they had our attention. And things just sped up from there.

After only a couple of songs, Justin and Kat invited a few friends (and one family member) onstage to play with them. They powered through "We Fuck the Night" and I don't think I've ever heard it played with such intensity.

Having the additional band members also gave Kat and Justin the opportunity of singing a duet without having to play their instruments. I personally loved that part of the show. I heard a different review from another person in the audience, saying that it was "like listening to bad karaoke". I just don't think they got it. To me, it was everything it was supposed to be: a deep, soulful, bluesy love song. It was sweaty, messy, sexy and powerful. You could feel the love coming from the stage. 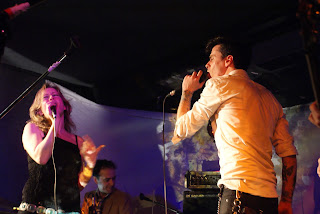 Ya make me shake.

For me the highlight of the night was their encore - after briefly employing a Napalm Death riff as the opening of the song, the band started playing "Icy Hands" - easily my favourite track off of their Threats/Worship album. I finally stopped playing the "blogger" and just went crazy and started moshing.

What an excellent way to end the weekend!
Posted by Anonymous