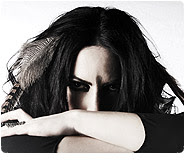 It's been a long journey for Toronto based musical collaboration, Konqistador to quest for the path to make a revolutionary sound in their music. Konqistador is a project which started off by a Canadian duo, Elizabeth Graham and Reginald Tissen. It seemed as if they emerged from nowhere in the music industry. Yet, it took about six years for them to build a magmatic concept beneath of the surface.

The reason behind the long hiatus is, although I've called them 'Toronto based', their backgrounds vary from Winsdor/ Detroit, Melbourne Australia and Turkey as they have settled down from one place to another. You can hear the diversity in their sounds, not only in terms of music genres, but also in their influences, which they have obtained in the process. After a nearly six year long hiatus, Konqistador is at last set to release a new album, Suada (meaning Persuasion) on September 18th.

This album consists of electronic gothic feel in their sounds coated with aesthetic Middle Eastern  music. The initial song, Harcanan Kotu, kicks off with exotic distorted guitar haul, which leads to the marching beats. The song escalates its speed to full capacity with galvanizing electronic systh and a whispering vocal echoes. The album title tune, Suade, is a mesmerizing invitation to the world of Kongistador. As I was withdrawn to this surreal world, where they've discovered the perfect equation to put all various elements in one big pot, I find it quite addictive to immerse myself with their music. In the interviews with various members, there is a repeated comment from everyone: the uniqueness of Kongistador. It's the first thing that you grasp while listening to their tunes. I am also very interested to see how they would showcase their sound in the live show as it seems impossible to put all the elements together in the live show.


Kongistador is playing in Toronto at the Hoxton on December 15th.
Posted by Unknown