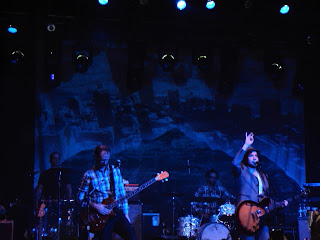 , is just like an All Star game: You get to see the best of Toronto musicians in one shot. It was the first of two hometown shows for the band, which has been on a world tour this year after releasing their 4th album Forgiveness Rock Record

. The founder of the band, Kevin Drew, even mentioned during the show that it's amazing, but he doesn't know who will be on the stage at any one time for people are just coming and going for each song. (I was very impressed with the instrument tech  on the left side corner of the backstage prepping and handing gear to the performers during the show.)  But that's what made the gig so unexpected, dynamic, and entertaining. This is what the audience came to see. 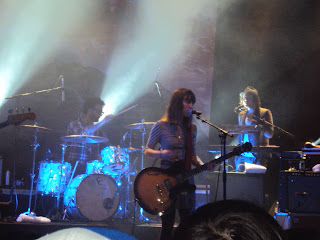 The lulled crowd were a bit slow to energize due to the long wait, but the atmosphere picked up quickly by the third song, "Texico Bitches

" when Amy Milan (Star) and Leslie Feist jumped on the stage with the rest of crew. The energy of the performance bumped things up and accelerated from that point. It was just like a perfect Christmas gift from the band. You were sitting in front of a Christmas tree, awaiting to open a number of presents from underneath. Each time you opened a present, you are filled with surprise and wonder - you scream "OMG OMG OMG! thank you, thank you, thank you!!" - Just like this. I definitely went "OMG!" when Leslie Feist came back on the stage and played her hit song, "Feel It All". Another gift from the band was "Anthems for a Seventeen Years Old Girl" and "Sweetest Kill": these two songs were just so beautifully performed, evoking tears. 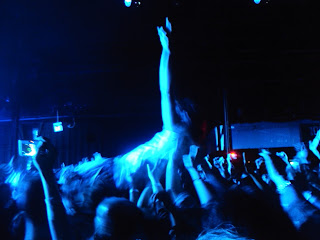 In addition to the full attendance of the regular tour including Kevin Drew, co-founder of the band, Brendan Canning, Justin Peroff, Andrew Whiteman, Charles Spearin, David French, Sam Goldberg, Lisa Lobsinger, and John McEntire, a number of musicians joined during the show, such as Jason Collett and James Shaw - the guitarist for Metric, coming out to play for their hometown. My favorite part of the show was when Kevin and Andrew harmonized a verse of either guitar or vocals. The chemistry between the two of them was pleasantly electrifying: very powerful, yet, with delicate touch.

The main potion of the show ended with "Meet me in the Basement" Everyone at the show coalesced into a single entity, filled with enjoyment as the music flew from the stage to the audience. Kevin decided to dive into the crowd after the song. Lots of laughs, lots of joy, all night long.

The show continued with a few more songs as a part of so-called "after party" and lasted till close clocking the entire show at two hours. The energy lasted until the very end. It was one of the best two hours that I have ever spent and could easily be one of the best shows I've seen this year. An amazing night, and it was the best Christmas gift.

Broken Social Scene still continues their tour through Canada until next month. If they are coming to your town, then you must see them. Broken Social Scene is the best thing that the city of Toronto has created in recent memory. Apart from Scott Pilgrim of course.