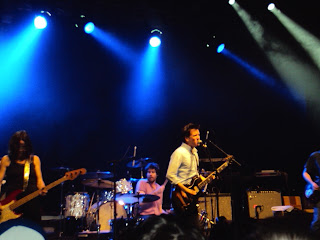 (BSS). Privileged with the exposure, playing to Toronto indie music nerds, who have been well-indulged with various talented local bands. Could Superchunk

impress them? - I doubt that... Despite their hard hitting performance, the band barely made the audience move, rather were faced with motionless standees waiting for the set to end. Their college punk sound did not speak to the BSS fans, who always seek for something more exceptional. Their music reminded me of the good old  high school days when Green Days and Blink182 were becoming popular. But some of us have outgrown that style. 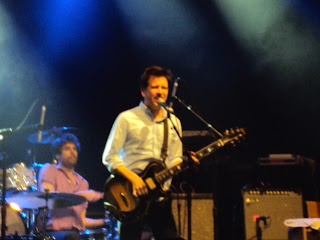 As amusing as some of their song titles were; "Cross Fire", and "My Gap Feels Weird", I did not enjoy the music. Their performance was solid enough, what they do they do well, but it felt out of place just because it wasn't the cup of a tea for most of the audience. It is as if you went to see The Smiths, but then Marilyn Manson appeared on the stage.

The select few that were into their stuff, like the two idiots moshing next to me (Grrrrr) were probably enthusiastically channeling their more juvenile selves.  The Front man Mac McCaughan even stated" While everyone is sleeping, it's nice to see some people are dancing over there." (Pointing at the right front side.)


Stay tuned for the show review of the BSS coming up shortly. They rocked me to my core.
.
Posted by Unknown