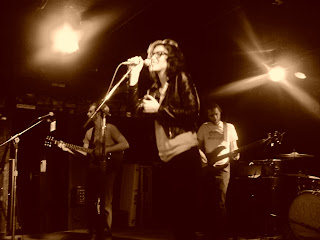 It is such a pleasant feeling when an opening band surpasses my expectations and entertains me before the headliner performs. I always make sure to be on time for any kinds of gigs for this very reason. Whale Tooth was no exception. As I went to see the Montreal electro/alt pop band, Winter Gloves, on Friday at the Horse Shoe Tavern, I was lucky enough to discover the Toronto based five-piece band. When they appeared on the stage, I had a very good feeling about them - indeed, they looked the part! Elise, the alluring lead singer, donned a hipster look, with black thick-rim glasses and a black leather jacket- teasing us with the promise of a great show to come. Yes, I was very excited! 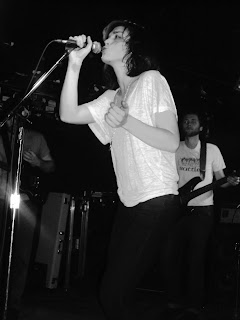 Their performance did not disappoint. They began their set with their more jazzy light-hearted songs. Building up pace and depth, by the third song we were treated to their more funky pop rock riffs. Throughout the show Elise's outfit changed, transforming with their set as she loosened up and the groove took hold. By the end she had removed her jacket and glasses - dancing and interacting with the other band members - the audience ate it up.  I especially liked their duet moments, which created a beautiful echo- adding extra dimension to their sound.  (I thought it reminded me of Metric, but my boyfriend disagrees.)

They also performed a couple of songs that are to be recorded pretty soon. As my boyfriend grabbed their CD, I can't wait to check it out. The CD review should be coming up very soon!

As any good opening bad should, they set the perfect stage for Winter Gloves' set. They left us wanting more, and hopefully we will be treated to more of Whale Tooth in the near future.

For a review of Winter Gloves' wicked performance click here.
Posted by Unknown