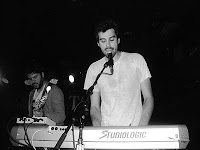 Completely satisfied with the performance by the opening band, Whale Tooth, I was extremely anxious to see the Montreal four-piece, Winter Gloves. I have been hooked on their new album, All Red, since the first time that I heard "Plastic Slide". With it's 16th note rhythm and captivating melody, this song is a fantastic introduction to the band which, in turn, made me decide to check out the CD release party at the legendary Horse Shoe Tavern. 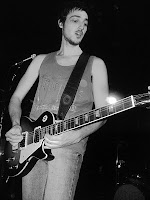 The performance at the Shoe was enjoyable for even those people who hadn't had a chance to fully tune in on. In fact, my boyfriend, who had not previously heard any of their songs, was amazed by the every minute of the performance. We both agree the bass lines created during the gig far surpass the recorded material. You have to be there to feel the beat and appreciate how good it was.

When the singer jumped on the stage, we were astonished as I was like " I've been him somewhere before" and yes of course, he was just behind us all this time when the opening band was playing.  Not many headliners check out the opening bands' performance right at the front - I was very impressed! 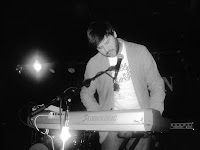 The performance continued with the mix of songs from both albums. I especially liked the songs when all three members played their keyboards as these songs have a strong electro vibe - it was more fun to watch. But don't get me wrong, I love the combination of their different sounds both electro and indie fused. There wasn't any moments that I wanted to miss!


One thing, however, bothered me throughout the show was the crowd. It really sucks when the performance on the stage is excellent, yet, the crowd sucks. Spending your time texting right at the front or the serial molestation of girls in the crowd, no thanks.

Yet overall, Winter Gloves was thoroughly enjoyable and I look forward to seeing them again next time they are in town!!
Posted by Unknown