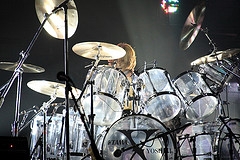 It's been almost a month since one of the most popular Japanese bands, X Japan, brought a mind-blowing show in Toronto.It wasn't only us who had been waiting almost 10 years to see them in live. I have received an enthusiastic review from Nanochoahey. Here is what he has to say about the show. Enjoy! And if you haven't checked out the Bryen's review, click here! 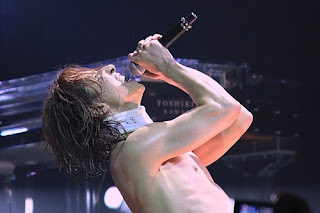 A long lost dream was finally fulfilled. A concert that had been waited for
years and years was at last come true! It was absolutely one of the most blessed

moments in my life as I was standing right at the first row before the stage,
watching my one and only beloved group, X Japan performed in front of me......
I think the show was started at probably something like 930 pm. I was absolutely

too nervous and overwhelmed by the excitement of the atmosphere. As I was
standing too close to the amplifiers in the beginning, I could hardly hear
TOSHI's vocal as it was totally over by the fury of the electric guitars. You
can imagine how later on, me and the other fans gradually moved toward the
middle of the stage without the intervention from the security guys. =P
Everything was just like a dream. I couldn't believe I was actually so closed to

X! The shortest distance between us was probably liked a stretch of your hand. I
were so closed and almost reached my hand to YOSHIKI. But there were just too
many people so I was never succeeded.
Each single member from X is special and unique in its own way and shined with

its own character. PATA, always stayed very low profile, stood on the left side
of the stage calmly playing his guitar. With a mix emotion of coolness and
poetic rage coming from his eyes, HEATH was skillfully playing his bass guitar
besides PATA. You would be surprised he actually had a lot of eye contacts with
the fans in the front.

SUGIZO, may be he was the last to join the reunited X as a supporting role for
HIDE, I do have a lot of high respect with his continuous pursue in music
perfection. Watching how did he dance around with his body and swing the bow of
the violin to interpret each single music note, you would have an inexplicable

excitement arisen from the bottom of your heart.
And what really surprised me the most was TOSHI! I thought my strongest

impression on him would be his unique vocal and his singing; but no, absolutely
that was not the first thing I was feeling about him. It was actually his every
single smile from the face that charmed by heart in the show. I had never seen
TOSHI smiling like this, it just warmed every inch of my soul and I felt I was
so much blessed in his smile. I could feel this was also a smile of relief for
him. No matter how many unpleasant things happened in the past, it was over now
and I hope TOSHI can be happy like this forever!  ^^ 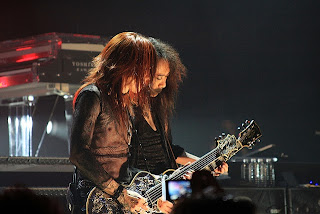 As for YOSHIKI, I couldn't even think of a right word to describe him. Unless
you are watching him on live and feel on him and his music with your whole
heart, there is no way you could thoroughly experience his charismatic and deep
impact! The harmonized union of traditional classics and rock metal is the one

of a kind of X’s unique music! Watching YOSHIKI used all of his body strength to
hit on the Zildjian white drums, my heart beat was rapidly accelerated and my
emotion was boosted to the highest point! While watching his fingertips
continuously dancing over the top of the piano keyboard, it felt like time was
already ceased, I could not breathe and didn't have a heartbeat; everything was
only peacefully flowing in the river of harmony and the perfection of music
melody.
The concert was started with a new song, "Jade". I don't know why somehow it

felt like this song is actually talking about HIDE. May be is because of the
lyrics, ‘I still hide (HIDE), at the scene of memories.’  But a Japanese friend
of mine just thought this song is all about the unpleasantness of TOSHI in the
past, how he were sunk into the darkness and now was set free. And I wonder what
do you feel about this song?
The second song for the concert was one of my favorite opening songs, "Rusty

Nail". It was a pity that there wasn't any traditional way of member
introduction. I really wanted to hear it one more time, saying "….on
guitar....... HIDE...." I really miss him so much! In fact, if you had observed
clearly from the front, there was a little HIDE hiding in the control center on
the right hand side. =P 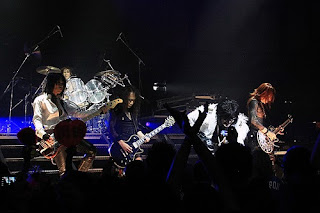 After playing "Silent Jealousy", why it had to be "Drain"? Could I not thinking

about HIDE when X was playing this song? It was too cruel that it only made me
miss him again and again in this concert. It would be really difficult to
imagine he was not actually there; it would be just too painful to do
that.......
When X was singing "Born to be Free" and "X" after encore, the atmosphere of the

concert had been pushed to the peak of climax! All 2000 more X fans were crazily
chanting and screaming in the hall, the ceaseless traditional X jump together
with the fury play of YOSHIKI’s drum and the arrogant slapping of electric
guitars. The whole venue was overflowed with an atmosphere of explosive feeling
and boundless energy. From the front to the end, from the left to the right and
from the main floor to the top of 3rd floor, it felt like all the fans were
riding on a big wheel of fortune, kept spinning and spinning until it reached to
the top of the sky.
When all the X fans was singing "Endless Rain" and echoing in harmony, it was

the most touching and unforgettable moment of the night. When I saw the girl
next to me crying as she sang along, when I saw a Canadian guy wholeheartedly
singing, "Endless rain, fall on my heart, kokoro no kizu ni, let me forget, all
of the hate, all of the sadness"....... I couldn't help shedding my tears from
rolling down to the cheek. Just like you and me or any other X's fan, we were
all grown up in X music, feeling with the same kind of pain, the same kind of
joy and sadness, and sharing with the same kind of tears. X music is a witness
of my life and the memories of my life. When the melody of ‘Endless Rain’ was
flowing into my heart again,' it just brought back all my memories for the
lifetime……..
Finally, you realized everything had come to an end when it was playing the

background music of ‘Forever Love’. I really didn’t want that happen and I
really hoped we could go back in time and restart everything again….. I knew I
was going to miss YOSHIKI and X so much for the rest of my lifetime.
When I saw PATA and HEATH slowly waving their hands saying goodbye to us, my

heart was clouded with a mixed emotion of warmness and turmoil, it was actually
felt like a close family member would be departed from us for a very, very long
time. I hated myself so much for not preparing well enough for this concert.
As for SUGIZO, he was still busy in running around, squeezing water and throwing

bottle to the fans.  Of course everybody was really enjoyed about that. The
highest throw he made was all the way up to the 3rd level balcony. You could
imagine how crazy it went with the fans at that moment.
On the other side, YOSHIKI and TOSHI were busily taken pictures with the fans at

the right side of the stage. Everybody went totally insane trying to squeeze a
spot for that. I was too late when I reached to the front stage as they had
already finished the photo taking. Pissed me off, Wahaka! @@"
At last, all 5 members of X, YOSHKI, TOSHI, (HIDE), SUGIZO, PATA and HEATH were

with enough preparation and sufficient promotion. But I am sure at a certain
degree; YOSHIKI has already successfully created a ground for us and his future
development of X Japan in the North American market. May be it will still take
some considerable time to open up the market completely, but I feel there is a
deeper meaning of this tour to YOSHIKI, X and all the fans here. This concert is
definitely more than just a show YOSHIKI put on for us as a 90 minutes
entertainment. Instead of seeing this as a single event, I hope this has
actually become a movement for all of the North American fans here as YOSHIKI
now had rooted the seeds inside our hearts and on this land.
If we, all the X fans here can be united together and forming one platform to

promote and channel X music at different levels, we can be pretty sure that
YOSHIKI’s music is going to have a much profound impact in North America.
However, we must also understand that this will be a long journey and we are not
going to accomplish everything just by one or two days.
I don’t see this "North America Tour" was actually finished, but rather I think 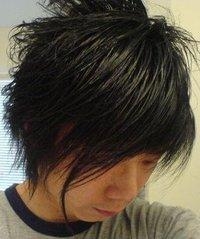 Special thanks to Sasoriza for pictures of X japan. Click here to check out his incredible works!
Posted by Unknown