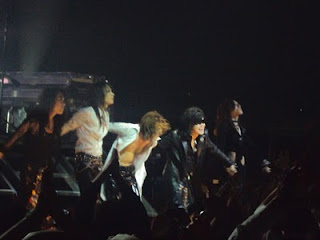 When I first fell in love with X Japan and their beautiful music; I never thought I’d ever get to see them play. I discovered them in high school about 8 or 9 years ago. I was just learning how to play the guitar and was looking for “guitar solo” video’s to worship while I fumbled my way through learning them. I was a metal head – but what drew me in – and set X Japan apart from their heavy metal contemporaries -was how well crafted the songwriting was. It was both sweeping and epic; but the songs had a pop sense at the same time. They initially disbanded in 1997 – a full five years before I discovered them. Their most famous member Hideto Matsumoto – best known by his stage name hide – was found dead on May 2nd 1998.
Yes. In my mind – this was a band I would never have the pleasure of seeing.

That all changed yesterday. I never thought I would see the band in their home country of Japan; never mind in Toronto! When I found out they were doing a world tour I booked tickets right away!

Everything from last night is surreal. It feels like a dream. A dream that I wish would never end. It is hard to describe being both so happy to have finally seen them yet unbelievably sad that it is over. This band has been through every moment with me in my life since high school. It brought me and my best friend back together after we had a terrible falling out. X Japan is beauty – X Japan is love.

The show was a smaller scale than that of their shows in Japan; but let’s face it - they are quite used to playing arenas in Japan and this was Massey Hall, one of the most intimate venues in Toronto. That doesn’t mean the show was small by any means. It just made their show seem so much bigger up close!

It was amazing to see them all in person. Most people in Japan never get to be so close to them! We were less than 15 feet away from our heroes! The whole show was a rush of emotions that I am truly unable to describe. I am not ashamed to say that tears welled up in my eyes three times throughout the show. It was such an experience for everyone there. I’ve been to a lot of shows – I’ve seen nearly all my favourite bands (with the exception of Jane’s Addiction and Led Zeppelin). I’ve experienced the intense excitement that seeing a concert brings at all of them. But I have never felt the intense emotion that X Japan’s show brought last night. I’ve never felt a room full of love. It was amazing.

The whole venue felt as one last night. We are X – You are X – We Love X.
Posted by Anonymous