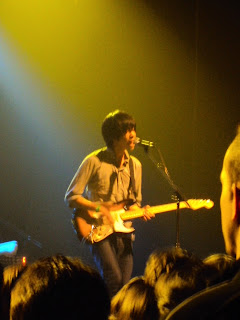 I was very excited last night-  maybe I was  hyper from the two cups of coffee that I had beforehand - Yes, it was my first time seeing the Montreal indie rock band Wolf Parade.

On a cold night like last night, the off-the-beaten track venue - the Sound Academy - seemed even further away, but I got there early nonetheless.

Not knowing who was going to be opening for the night, I was simply enjoying the night with my friends and nursing a few beers, eagerly anticipating the headliners appearance. Until I heard the name of the opening band, I really hadn't given them a second thought -Ogre You Asshole. Not having heard of them before I assumed they were not a big deal, neither here nor in Japan - their homeland and mine. I couldn't have been more wrong. When I told my friend in Japan that I saw them, she geeked out with an"OMG, you are sooo lucky.." They have played a number of major Japanese festivals this year, including Fuji Rock whose lineup this year included such major bands as Muse, Them Crooked Vulture, Massive Attacks, MGMT and so on.

Being a bit more excited to check out the band, OYA hit the stage just on time. Starting off with groovy guitar licks, the band rocked the stage and made it hard not to sway one's hips. The Front man, Manabu hit such high notes with his vocals that they seemed to be coming from somewhere else. They kept entertaining the Canadian crowed with their soft but catchy tunes, including Pinhole, Balance, and Advantage. They lost the crowd a bit due to the language barrier, but being Japanese I had no problems.

Overall, however, it was a great performance. They slid right up to the line that exists between a north american audiences and performers that sing in foreign language. It was great exposure for the band play outside their home territory. I cannot wait to see them again in Canada!

Here is one of the songs that they played last night, my favorite - Balance

Wolf Parade at Sound Academy review coming soon. Be sure to check back!
Posted by Unknown