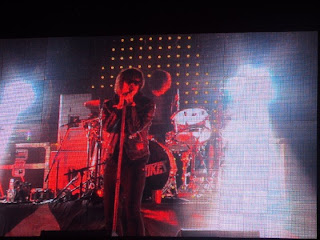 One of the reasons that I decided to go to Lollapalooza was to see the legendary New York born indie-rock band - The Strokes. They hadn’t played any shows in the U.S for at least three years. There were rumors that they might split up - spread after some members commenced their solo work. Their solo material really showcases how varied their music taste is outside of the band. Their soon-to-be released 4th album has been postponed for a couple times now – so much so that the label has asked Julian Casablancas; the lead singer to stop talking about it. I’m not sure if a label has ever asked a band to not promote their work! So I had to check out my favorite band before they broke up - well the chance is pretty high (I hope not though, knocking on wood right now!)


They took to the stage after a 15 minute wait; beginning their performance with “New York City Corp” Despite the steamy hot weather, Julian was wearing a leather jacket with a hood, just as he did for the solo live show in Toronto back in April. Their show was very intimidating as their charismatic presence on the stage was overwhelming. (This is maybe just me being extremely excited to see them), but very entertaining as they played all well-known songs, including “Last Night”, “Someday” my favorite song – “You only live once”, “Juice box”, and so on and so forth.

When they played “Hard to explain” I could not help but compare the performance to when Julian played it solo at Kool Haus in Toronto. The song sounded way better here; and although there is a rumor about a split, the song still sounded very tight – convincing me that the members are only working on their solo projects in order to bring “newness” to the band.

What made the show even brighter was Julian’s MC between songs. “Fireworks shit!” Julian brought some laughs to the audience when he saw a firework from the Lady Gage’s stage. The most incredible comment was when someone from the audience said " you talk to much", he replied by saying  “someone used my own venom to sting me." and continue with the song " Last Nite." I found the video on Youtube :) Here you go!

However, it was quite a disappointment that the band left 15 minutes earlier than their allotted set time after playing a very brief ‘encore’ with “ Heart in a cage” and “Take it or Leave it” Not much of an encore seeing that the band the band took a bit of breaks on the stage (Yes, they did not leave the stage)

With a strong hope that they would be back to the stage after the last song, the music started playing and I heard disenchantment among the audience. Another thing is that I was expecting them to play some of new songs from a new album as a sneak peek; however, they didn’t.

Overall, The Strokes marked No.4 in the ranking as they are still my favorite band and their performance overall still wowed me. I would love to see them again touring with a new album.