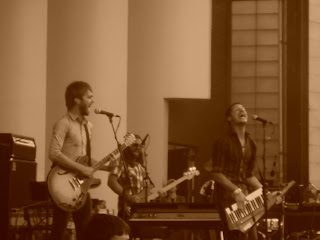 It was love at first sight. Astonished by their exordial live performance at the Virgin music festival 2009, Mutemath has quickly become one of my favorite bands of all the time. I also saw Mutemath - an experimental, alternative rock/pop- (it is very hard to describe what genre this band) - in NYC last November. I promised myself that the next time that I got to see them, I would be in the front to experience the sheer awesomeness of their live show. 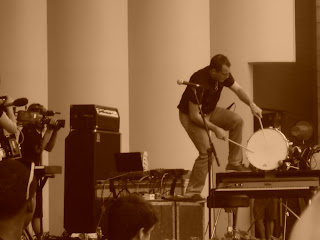 Mutemath was to play a one hour set on Sunday. I ran to the South side of the park, leaving behind X Japan and the crew I came with. I was able to set myself fairly close to the front. They started their set with the first song off their second album, “The Nerve”. The four members appeared on the stage confidently, but not very charismatically. They look like ordinary people who can be found wandering anywhere downtown - until they start playing. Darren the drummer is particularly exciting to watch. He plays so hard that he has to wraps his headphone with a duck tape to keep them on his head! 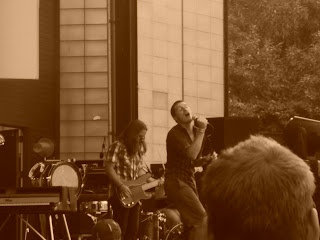 They followed “The nerve” with “Backfire”, “Typical”, and “Spotlight” – followed by the lead singer, Paul, congratulating Darren for his recent marriage and wishing a happy birthday to Greg, the guitarist.

I cannot put into words how crazy their live show is. Audiences cannot take eyes off the stage not to miss a second from their extreme performance. Paul jumped into the crows a couple of times, almost smashing his head on the stage at one point! I wonder if bands have some sort of work place safety and insurance… I doubt it. 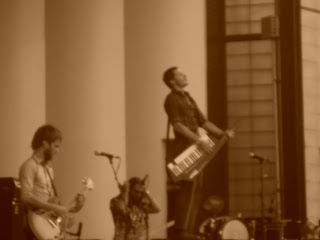 To close the show, as their normal performance, they played two of their best; “Reset” and “ Break the same.” The transformation between these two songs is so smooth that they are like one. During these songs, three members play the drums and the other use the guitar amps to make exocentric electronic sound, which wow you for sure. You just have to be there to experience it!
One thing that I was thinking during the show was their shows have become very predictable in terms of which songs and what performance comes after. Maybe it’s just me – I’ve seen them shows three times this year. I think what they need is new songs. They start recording sessions after the summer tour. It was about the time, I guess.
They are easily the one of the best live bands that I have ever seen.
Posted by Unknown