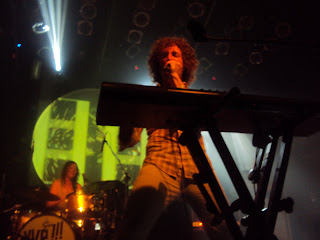 so the last posting was about the opening band, Hollerado. After dancing around like a penguin with a good tunes, HOT HOT HEAT hit the stage on time. It was quite interesting to see that they all had to clean the stage and set it up within 20 mins due to the tight schedule of NXNE. 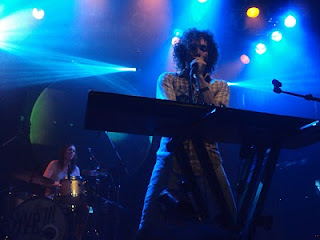 I was able to get the song listing of the show as I was right in front of Steve, the lead singer/keyboard player. I always wanted to see this band in front and I had decided no matter how long i wait, I would be in the front. Luckily, the venue was not busy as I anticipated. ( you still gotta remember that there was a free show of Iggy & the Stooges @ yonge and Dundas square at the same time!

I also found that the atmosphere of the NXNE is very different from normal gigs. Lots of people are there to "listen" to the music, Literally " listen" I mean, lots of people are so into music, so there are to analyze every single details of the band performance. 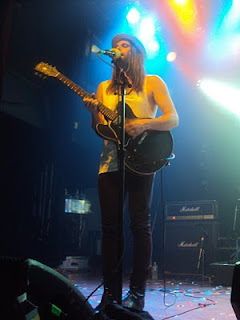 But I didn't care! I always wanted to see Hot hot heat. so I set myself right in front of the show. Steve was getting drunk as the bar got them about 4-5 tequila shots by the end of the show.

The song listening was very various, not only from the new album ' future breed", but also they played famous tunes, such as ' good night, good night' " Bandage" ' talk to me and dance with me" " middle of nowhere" " running out" and so forth.

I think my favorite was " Good night, good might" I just wish the song was a bit longer. the song itself is about 2 mins, so it is fairly short.  but I love the song so much. very catchy!

They recently substituted the bassist. he was a bit awkward, but just good enough to fill in the spot for the show for now. Drummer was consist ant and very fun to watch.

I videotaped the song" Bandage' I am now trying to set up the Flicker's account. so stay tuned...
Posted by Unknown