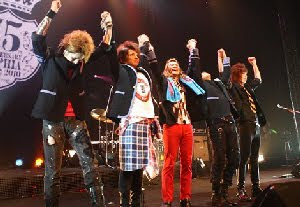 Happy Sunday everyone! it is a very quit and beatiful morning, eh? I got up around 7a.m this morning... not quite sure why I got up so early on Sunday though. It is gonna be a good day as the weather is beautiful. I am thinking of going to a spinning class just to sweat off my stress from studying  :)

I was checking the Yahoo Japan news this morning and there was an article about the band that I love. Well, I have a posting in the past about the band called " Sophia"( http://www.musicpsychos.com/2010/01/sophia-band-which-saved-and-completely.html) I gotta say that they are my first "band crash" as I love them since I was 12 years old. Whenever I listen to them, I think of the past. However, sincce I've been in Toronto, I didn't really had a chance to check out their new stuff. But they are celebrating their 15th band aniversary this year and just finished their final gig of the tour.

However, in the last month, the band has announced that they will take a break. It is due to the fact that Kennichi Miyako, the keyboard player of the band, has developed a cancer and he will be focusing on his treatment after this tour. this news really striked me though. I hope him for the best, but I cannot believe it! But I think he can do this! Ganbatte Miyako!! (Good luck!!)

So I have a couple of songs to post to dedicate this posting for him! ( I know that he is not reading it, but you know :) )

One of them is called " Machi (city)" If I didn't listen to this song 14years ago on TV, I would have not fell in love with the band. There is a new version of the song on Youtube. I could not embed it onto my blog, so the below is the link. it is also fun to compare it with the old version as well. they sound different ( in a good way, of course)

here is the new version of the song

Another song that I will post is called "-&-". This song is from an album called "ALIVE" and it is not a single from the album. but I love the lyrics of the song.

and the last song is "shinka ron" ( the Theory of Evolution) I just love the outfits in the music video ( just kidding) but very interesting song.