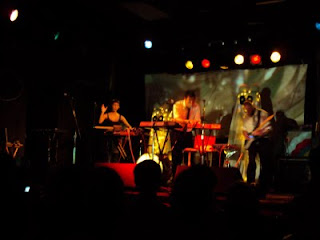 This is gonna be my first show review EVER!! lol let me know what you think, ok? I had an opportunity to check out a band called “the Octopus Project” last night @ Lee’s Palace. One of my friends saw them last time when they were in Toronto. But since the show was double-booked with another band, they had to play at a different location. Thus, the audience was only about 5 people due to the problem. My lucky friend got to see them and told me how great it was. So, without having any plans on Tuesday night, I decided to check them out with him. I had listened to a couple of their songs before the show. It was not the type of Music that I usually like. But they sounded pretty decent. So finally I made up my mind and went to one of my favourite places, Lee’s Palace.

The last time that I was there, I saw Butch Walker.. When I got to the place, all the nostalgic memories came back to my mind... Ummm, Butch walker… Please come back to Toronto ASAP! After a couple of beers and a chat with friends of his, the opening band, Modern boys Modern Girls started playing. The First impression,,, they sounded ok. The solid sounds from the drums and bass . I wanted to hear more guitar solos though. The vocal was ok, but nothing special about it. Anyhow, after a few songs, they sounded all the same..

Despite a little bit of disappointment of the first band, I got more curious to see the Octopus Project.The place started becoming crowded. The kids are going closer to the stage. The members of the band showed up and started setting up their instruments and on the stage (they set up two ghosts on the stage lol). Some of the instruments are pretty… odd. I was asking my friend what they are. I’d never seen them before in my entire life. Especially, there was a wood-ish instrument next to 2 key boards. It was called a “Theremin”. It is an electronic instrument and can be controlled without touching it. It looked really interesting when the band member was playing. Their songs are more like instrumental, not much singing involved. The projected screen showed all sorts of music videos. Creative!!

The best thing that blows my mind was the band members switch their instruments quite often. It’s basically everybody can play anything, seriously! The drummer was playing the drums, but all the sudden he was playing the guitar… things like that!!!

Well, overall the show was something of an extraordinary mind blowing show for sure I did record one song for this blog and took a couple of pictures for you guys. ENJOY!!