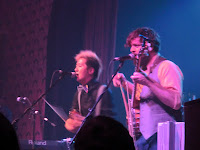 " We've decided to come up to Toronto in the middle of winter and we are so glad that we made it"-excitedly exclaimed K Ishibashi, Seattle born violinist, who leads an experimental pop project,  Kishi Bashi. They'd safely arrived to Toronto in the severe winter weather in the North East region and wowed its audience at the Great Hall on Monday Feb 11th.

The stage was gradually filled up with smoke prior to the set as a part of the visuals, which created a very artistic feel in the venue. The excitement reached its peak when a blond soft mohawk violinist, lushly dressed up in a black shirt with bold bow tie and spandex, appeared on the stage with two fellow musicians. He instantly started crafting beautiful melodies with his violin and his dreamy voice, while his members sugarcoated it with lively banjo, keys and percussion.

When I listen to the latest album, 151a, I imagined his performance to be created by tons of musicians filling a stage (sort of like a orchestral setting.) Instead, only three talented musicians maneuvered their instruments while K looped layers of flawless violin waves, his mellifluous harmonies and captivating beatbox, which expanded the sounds of the trio to the fullest. When they performed quieter songs, such as Wonder Woman, Wonder Me and I am Antichrist to you, the entire venue was withdrawn to the world of Kishi Bashi, where a pin drop can be heard. On the other hand, the audience enjoyed dancing to the jubilant up-temp tunes, including Bright Lights. "I wrote a song back in 1987 about the Orinoco River..." Jokingly introduced the cover song, Orinoco Flow by Enya,  K sang it as if he put his heart out on the song. He finished his set with a resonant melodic sensation, Manchester, which added the emotive finish to the breath-taking show.


Kishi Bashi's latest album is called 151a, which is pronounced it as "Ichigo Ichie."-(一期一会) This word means one time in one life time. The concept of the word derived from the world of Japanese tea ceremony- the motto for tea master to make each tea serving unique and special. In this world, it is almost impossible to gather the same people in one room again, especially a big show like this one. The experience of Kishi Bashi was definitely served as Ichigo Ichie, which will always stay somewhere in my memory.