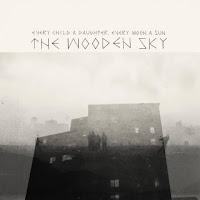 Since I got a great feedback on my top 5 live show in 2012, let's continue with my best top 10 songs of 2012! Since I couldn't decide the order, it is in no particular order!

One of my favorite albums of the year is Toronto folk rock band, The Wooden Sky's sophomore effort, Every Child A Daughter, Even Moon A Sun. Angelina is their first single off the album. This tune is soaked in delicate melodies that aced the perfection in simplicity of folk music. I love listening to this song and get lost in the song completely.

Toronto rock band, Zeus released their anticipated second record, Busting Visions, which I've probably listened to hundreds times. I just saw them again at Drake Hotel Underground for What's in the Box series, and reconfirmed how talented they are! Impeccable harmonies and unison separate them from any other bands from Toronto.

This song, Bright Whites by Kishi Bashi is a rather recent discovery of mine. However, the moment that I heard this song,  It gave me an instant chill and joy at the moment that my ears were tickled by high pitched voice with a march of jubilant melodies, I can't wait to see him in the New Year when he comes in town in February.

Toronto folk singer songwriter, Bahamas, aka, Afie Jurvanen released his second album, Barcodes early this year. Whenever I listen to this song, I recall he came out prior to his sold out show at Dakota Tavern and showcased this song in the cold weather for the fans who were waiting in the line for a long time.

Three years after their debut album, Brit pop rock band, The XX unleashed their second album, Coexist in September this year. The first single off the record, Angels is definitely one of the songs that worth mentioning.  From the first listen, I was surely withdrawn into its beautiful tune and the intimate vocals. Yet, my attention was lured towards its lyrics, which I pictured a girl who discovered a love with someone, yet trying to find a means to express her feeling shyly. Nontheless, this tune is pretty xx-celent.

Since the breakup of the White Strips, Jack White has stepped up his game to showcase what he can offer to his fans. His latest album, Blunderbuss and the tour with The Peacocks( all female bands) and The Buzzards ( All male band) has kept him busy all year. This song, Sixteen Saltines is my favorite song off the album.-it's fully of Jack White-ness.

Toronto singer songwriter, Diamond Rings is a new pop sensation. His new album, Free Dimensional. Underneath of his flashy look, he showcases how he really is with his music and lyrics.

The lead singer of Burn Ruffians, Luke Lalonde has joined the Paper Bag Records this year and releases his first solo album, Rhythymnals. Undone, still has a hint of Born Ruffians in the alluring pop tune. However, Lalonde spiced it up by adding more electronic beats between the fetching melody.

PEI pop rock band, Paper Lions, released their new EP, Long Creek prior to their release of the full length album. Their prior album, Trophies, was on my heavy rotation for the longest time, so to be honest, I was very scared of listening to the new materials, however,  this song off the EP, Bodies in Winter proved that they are a real deal!

Nick and I had a great time chatting with PEI singer songwriter, Tim Chaisson this year.Beat This Heart,  his single off the new album, The Other Side welcomed Serena Ryder to co-sing in the song. The song kicks off with an amiable country pop tune with an effortless gentle vocal and a chain of warm acoustic string jams. just like his other songs, his lyrics are very relatable,