Craig Stickland at the Drake underground on Jan 10th 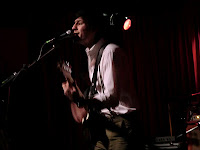 It's been a while since I saw the Drake Underground packed on Tuesday nights. It was for Toronto singer songwriter, Craig Stickland, who delivered an ambitious home town show on January 10th with Brent Jackson (The Junction) and Megan Bonnell.
Hot on a heels of the latest EP, Art of Conviction, Stickland showcased a tide of new tunes, which are to be enclosed in an upcoming full length album. The roots singer delivered catchy choruses, which leveraged his surging vocal. Although the half of the set was filled with unveiled songs to the audience, he remained as the centre of attention. He joyrode a new exploration with various genres in these newbies: Classic good oldie root songs to a 8mins of a Rock N Roll ballard, acclaimed as a reminiscent verse of Stairway to Heaven. But one thing stayed the same throughout the performance: Regardless of the musical styles, Stickland reached out to the bottom of a heart with his lyrics which the listeners mirrored themselves in each song. Indeed, it was a compellation of theme songs for our generation, which represent our feelings throughout daily life.
As an encore requested by a number of fans, who were truly moved by his performance that night, Stickland performed an acoustic cover of the Strokes' Whatever Happened', which left the venue silent,  while his stunning vocal echoed through the venue.   My eyes and ears were pleasantly surprised and the excitement continues until the new album release.
Posted by Unknown