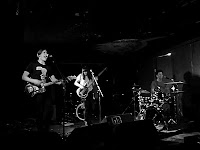 Vancouver power rock trio, Beekeeper rocked out the first Toronto show in 2012 with Convoys and the Danger Bees on January 19th 2012 at Sneaky Dees.
Fired up from their performance of the initial song, Table and Bed, embracing fun harmonies among three members, they slowly warmed up the shy Toronto audience. With the help of Longheed's witty repartee between songs, the audience were drawn to the stage closer step by step until the point the people danced off on the stage that unplugged Longheed's guitar cable from the amplifier during the last song.
Blending pieces from different genres, each song that they performed sounded distinctive, which kept the audience on their toes : From Latin dance rhythms,  pumpkin country tunes, to boisterous psychedelic distorted rock verses described as "Playful deceit."
Some might have interpreted it as 'inconsistent'. However, I found the diversity in their music entertaining as it cultivates my curiosity to discover what the trio would bring to the stage next.
Posted by Unknown